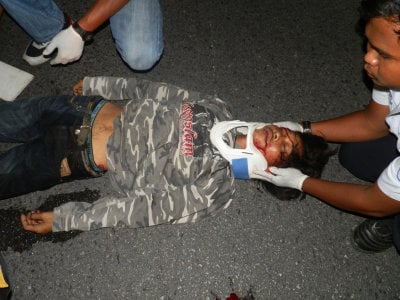 PHUKET: The driver of a white sedan that struck a motorbike on Thepkrasattri Road then failed to stop has handed himself in to police, while the victim in the accident remains at Vachira Phuket Hosiptal recovering from serious injury.

Motorbike rider Suriya Thathamlay was rushed to hospital by emergency workers after he was thrown to the ground when a car struck his motorbike on Thepkrasattri Road on January 14.

Police have since revealed that Mr Suriya had been drinking before the accident.

“Suriya, who was not wearing a helmet, crossed the southbound lane onto the northbound lane where he was struck by a white vehicle, which despite minor damage carried on driving,” said Thalang Police Duty Officer Capt Sonpong Yukkapun.

“The next day Prawit Rasri, 33, from Amnat Charoen [a northeastern province of Thailand] surrendered himself to police, admitting that he was the driver of the white Mazda M2 that had struck Suriya,” he said.

“Mr Prawit did not stop at the scene of the accident. He claimed he was in a state of shock at the time,” Capt Sonpong added.

A Vachira Hospital spokesperson said that Mr Suriya was originally admitted to the ICU, but his condition improved well enough for him to be moved to the neurosurgery unit the next day.

“I will see how many days Suriya has to remain in hospital. The longer the stay, the more serious the charge against the driver will be. Longer that 20 days means he was quite seriously injured,” Capt Sonpong said.