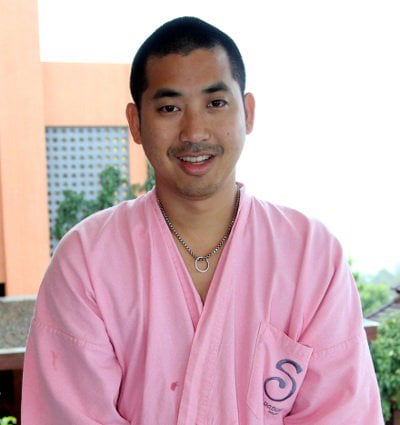 PHUKET: Police have arrested an eighth suspect wanted in connection with the stabbing of Vorasit “Pla-wan” Issara, the general manager of the Sri Panwa resort who was attacked by staff at the Rachada pub in Phuket Town earlier this month.

Phuket City Police deputy superintendent Jamroon Plaiduang released the name of the suspect but was unsure of his age. However, as the suspect is still in school, the Phuket Gazette will withhold the name given the likelihood that he is a minor.

The suspect has already been released on bail, but the seven others remain in jail, Lt Col Jamroon said.

“Khun Vorasit’s condition has improved, but he has not been able to walk much. His broken shoulder required further treatment at Bangkok Hospital Phuket, so he has to travel between the resort and the hospital,” Resident Manager Sumana Vorachun said.

“His right shoulder has re-separated between the clavicle and upper arm. We have to wait until other wounds heal before allowing him to have another shoulder surgery,” she said.

The injuries to his abdomen and intestines have healed well and he suffered no damage to his brain from the assault, she said.

Phuket likely to get Administrative Court