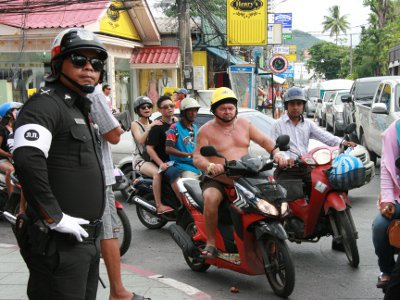 “The cameras will not be of the same type used in a project launched recently in Bangkok. [With this type] we will know who exceeds the speed limit and who breaks traffic laws – and tickets will be sent to the drivers’ houses later,” explained Phuket Provincial Police Commander Pekad Tantipong.

“I believe [drivers] will stop speeding and the number of road accidents will fall,” he added.

Maj Gen Pekad said the Phuket Highways Office was currently planning to make safety upgrades at 12 “blackspots” by October, at a cost of 9 million baht.

A further 85mn baht will be used on improving 38 other black spots during the coming fiscal year, starting October 1.

Among the locations slated for upgrades is the hilly section of Phra Barami Road from Kathu to Patong.

Also, flashing warning lights will be installed at Kuan Yang curve, in front of Wat Suwankeereewong (Patong Temple), and a median strip will be installed along Wiset Rd from Chalong Circle and Rawai Beach – as reported earlier by the Phuket Gazette.

The news came at the same August 11 meeting at Provincial Hall where Phuket Governor Tri Augkaradacha announced that the 94 million baht will be spent on fixing 50 road accident “blackspots” across the island.

The project is part of a national campaign initiated by the previous government and commenced on April 1 under the supervision of a committee headed by Phuket Provincial Police, Gov Tri said.

The accidents were caused by poor driving, the breaking of traffic laws as well as poor-quality roads, he added.