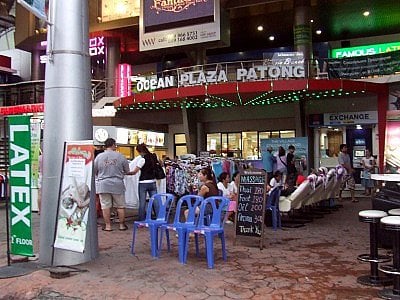 PHUKET: A young British tourist died in Patong early this morning after he accidentally placed his hand on an outdoor, floor-mounted power socket covered with water.

The 20-year-old man, whose name is being withheld pending notification of next of kin, was sitting in the undercover forecourt of the Ocean Plaza Patong [shopping mall] on Soi Bangla at about 6am when the incident happened.

“He was sitting with his male traveling companion and a group of Thai people,” said one officer who arrived at the scene.

“He was waving his hand around while talking and accidentally placed it on top of a power socket covered by a metal plate. There was a lot of water on the floor from the rain and he was electrocuted,” the officer said.

A Thai woman [in the group] tried to pull him away from the power socket, but she received a shock and could not pull herself away.

Then a Thai man tried to help, and he too suffered an electric shock and could not free himself.

“Another Thai guy saw this and kicked the Thai man away from the others. Then they used a wooden stick to push the Thai girl away,” the officer said.

The Thai man and woman were not seriously injured.

The British tourist’s friend suffered an electric shock when he tried to help.

He is now recovering at Wachira Phuket Hospital in Phuket Town.

“Although his physical injuries are not serious, he is suffering from the emotional shock of losing his friend,” a hospital worker told the Phuket Gazette.

A masseuse who works in the Ocean Plaza forecourt said today that she had heard about the incident, but was not aware that the man had died.

“We knew about the power socket, but we didn’t know that it could be so dangerous. Some of us used to walk barefoot around here, but now we all wear rubber soles all the time,” she said.

Phuket to get speed and traffic cameras