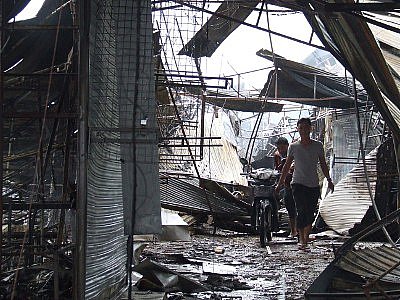 PHUKET: Market vendors whose shops were destroyed by fire on Wednesday are seeking government assistance in restarting their businesses.

Most of the vendors did not have insurance as most insurance companies do not offer policies for such indoor markets, one vendor said.

“There were 116 stalls run by more than 80 vendors at the market. Most of the shops were run by Thais, along with some people originally from Nepal and Vietnam,” said Mr Tossapol.

“I will discuss with Patong Mayor Pian Keesin how we can help the vendors as they are now broke,” he added.

Despite heavy downpours that night, the fire ripped through the Koh Kaew Market, located beside the Jungceylon shopping complex in Patong, on Phuket’s west coast.

“I’m broke now as the fire destroyed my shops, costing me more than four million baht altogether,” he said.

Mr La, who has lived in Phuket for more than 20 years and is married to a Thai, operated three clothes shops in the market over the past two years.

“Most shops had just ordered new stock in preparation for the high season. I had just received stock valued at over one million baht. I don’t know what I am going to do now,” said Mr Yanma

One woman who ran four clothes shops in the market for more than two years said that her shops generated more than 100,000 baht a day income in the high season.

Mr La and several other vendors expressed doubt over whether a short circuit started the fire, as has been suggested.

“I’m not sure an electrical short started the fire. It spread so quickly and it started at the back of the market, where there is no electricity,” Mr La said.

Mr Tossapol suggested the fire might have been deliberately set in an attempt to get the market vendors to move.

“The market has been there for about six years and it is on the same plot of land as Jungceylon shopping mall. We have been managing the market by ourselves and every month people come and collect rent for the ‘landlord’.

“However, we have never been able to track down who the actual landowner is. The original owner of the plot where the Koh Kaew Market is died more than 10 years ago,” he said.

“Usually when markets are burned, they are being turned into something else, such as hotels,” he said.

Phuket to get speed and traffic cameras