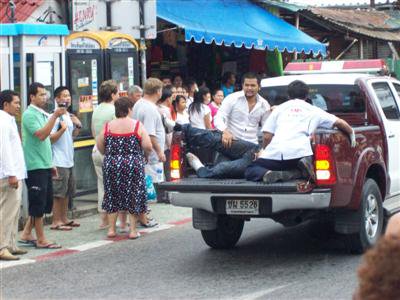 PATONG, PHUKET: Tourists ran for their lives when a gunfight erupted between two gangs on the Patong beachfront today. One man was killed and three injured in the Patong shootout.

Bystanders said two gangs of Thai men began shooting at each other on the site of the burned out Jintana shopping center on the Patong beach road in the early afternoon.

One witness said a gang of five Thai men started shooting at a gang of three men. The smaller gang returned fire.

The gunfight moved along the beach road to near the Clublime nightclub.

Police from a nearby checkpoint raced to the scene and organized ambulances to take the injured to hospitals.

One man was taken to Patong Hospital, where he later died.

The other three were taken to the Bangkok Hospital Phuket in Phuket City, where they are being treated in the intensive care unit.

Police chased a number of the gunmen down backstreet sois and arrested at least two men.

Police would only reveal the nick names of the men arrested as “Bank” and “Ood”.

The dead man is believed to be linked to the dispute over the ownership rights to the Jintana Plaza Shopping Center opposite Loma Park, which has been damaged by fire at least five times in the past two years.

Police believe this latest outbreak of violence is linked to a dispute over the Jintana Plaza land. Police confirmed that one of the men arrested had ties to the plaza.

Police were aware of the ongoing dispute and he was confident of arresting all of the men involved in the shootout very quickly, he said.

Tommy Somsanuk, marketing manager of the Clublime nightclub, said he heard a commotion just before the two gangs started shooting at each other.

“People were running for cover everywhere,” he said.

“They caught them both and took them away on the back of a police truck,” he said.