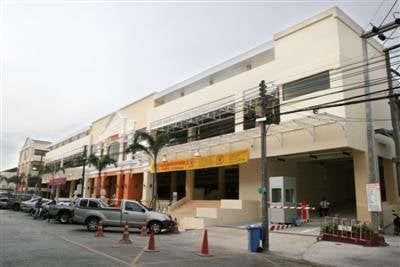 PHUKET CITY: Structural work on the new municipal market on Ranong Road is complete, but the 167-million-baht facility probably won’t be open for business until the end of the year.

Phuket City Mayor Somjai Suwansupana said the four-story market building and the 27 shophouse units surrounding it were finished, but interior work would probably take several months to plan and build.

There are currently 400 vendors wanting space at the market

Mayor Somjai has asked the vendors, who were moved from the site of the dilapidated former Ranong Road market to a temporary market on Wirat Hongyok Rd in June last year, to be patient.

“We need to get this right from the beginning, because once they move in they will be here for 30 years or longer,” she said.

There were so many vendors wanting space to sell such a wide variety of goods that it would take time to ensure everything was done properly, she said.

The first floor will be mostly for dry goods and products which don’t involve a lot of water, including clothes, fresh vegetables and other types of food.

The second floor will be the wet market, with designated areas for pork, fish, seafood and other meat products.

The top two floors will be used for public parking.

The market will also have facilities not normally associated with a Thai fresh market, including elevators, a Muslim prayer room and a conference room for vendor committee meetings.

Mayor Somjai said the city had been in regular communication with the vendors regarding safety and hygiene issues such as ventilation and waste water treatment,.

“We would like to thank all the vendors for their cooperation in making sure we have a great new market for Phuket,” she said.

“I expect the market to be open by the end of this year.”

The new market replaces the squalid wet market which had occupied the same site for more than fifty years.

Credit is available from the Bank for Agriculture and Agricultural Cooperatives.

The work should be completed by the end of October, he said.

Deputy Mayor Watcharapong said he expects the new market to be on par with the privately-run Banzaan Market in Patong in terms in hygiene.

After meeting with the 400 vendors last month, he said the new market would meet all of the vendors’ needs.

Phuket gangs shoot it out in Patong