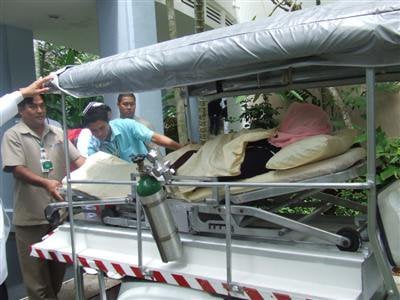 CHERNG TALAY, PHUKET: Emergency medical facilities including a temporary intensive care unit (ICU) are in place at Laguna Phuket in case any delegates at the Asean Ministerial Meetings fall seriously ill during the talks.

Three medical aid points have been set up specifically for such an event.

Open around the clock, the ICU unit is stocked with emergency medical equipment including defibrillators, respirators, heart monitoring devices and a wide variety of narcotics.

A second treatment unit at Canal Village, near the Dusit Laguna resort, has stand-by respirators and defibrillators in emergency packs which can be dispatched at a moment’s notice.

A third medical team is on standby at Phuket Community Hall in Phuket City.

The units, which went into operation last Wednesday, are manned with a total of 60 staff, including doctors, nurses and ambulance drivers. Each staff member will work one of three shifts daily throughout the event.

In case of an emergency, delegates will be rushed to either Bangkok Hospital Phuket or Vachira Phuket Hospital, both in Phuket City.

The volunteer patient was ‘defibrillated’ and transferred to a waiting ambulance by an electric-powered golf cart modified to serve as an indoor ambulance, complete with a retractable stretcher.

Special gurneys that can roll in a normal wheelchair configuration or stretch out into a bed are also on hand.

Two ambulances will remain on standby at the entrance to the Sheraton throughout the event.

Dr Sopon Kritsanarangsan of Bangkok Hospital Phuket said the ICU rooms will remain at the ready around the clock through tomorrow, the final day of the talks.

In case of an emergency, patients can dial the 1669 emergency hotline, where operators on duty at Phuket Community Hall will be on standby from 6am to 8pm to dispatch emergency medical staff.

Outside these hours calls will be routed to the normal 1669 center, which operates around the clock.

For military staff and other officers assigned to provide security during the event, another temporary medical service center is in operation at Cherng Talay Wittayakom School.

Phuket gangs shoot it out in Patong