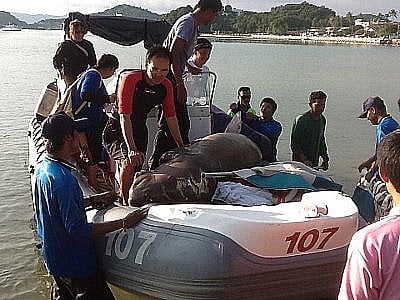 PHUKET: A dugong spotted injured off Cape Yamu, on Phuket’s east coast, last Saturday has died from its injuries after suffering severe cuts to its head and body inflicted by a boat propeller.

Kongkiat Kittiwattanawong, head of the Marine Endangered Species Unit at the Phuket Marine Biological Center (PMBC), told the Phuket Gazette that the sea cow was an adult female about 2.7 meters long and weighing 388 kilograms.

“It was a perfect breeder. We believe she had many sea cow babies before,” he added.

Dr Kongkiat explained that the PMBC received a report from a villager saying that a badly injured sea cow was seen trying to swim to the shore.

“Myself and other officers from the PMBC went to find her on Saturday morning, right after we received the report. After several hours, we spotted her in the bay. We kept her under observation on Saturday and Sunday to make sure she was able to dive and feed herself. We did not want to catch her and bring her to the center as we did not want her to be under added stress,” he explained.

“On Monday, she stopped eating and yesterday we brought her to the center. She was exhausted and she had seven deep wounds on her back. The wounds were starting to rot.

“She also had other wounds that looked like she had been stuck in a fishing net,” said Dr Kongkiat.

However, their efforts were too late. The sea cow died en route to the PMBC, located only a few kilometers away at Ao Yon, he added.