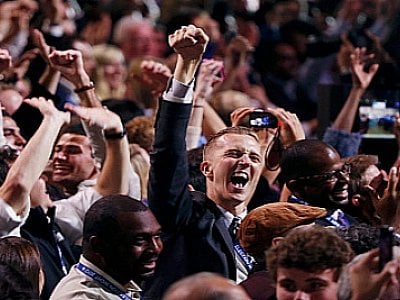 PHUKET: President Barack Obama rolled to re-election and a second term in the White House on Tuesday, defeating Republican challenger Mitt Romney and overcoming deep doubts about his handling of the US economy.

Obama defeated Romney in a series of key swing states despite a weak economic recovery and persistently high unemployment as US voters decided to stick with the first black president rather than go with the wealthy Republican.

Obama’s victory in the hotly contested swing state of Ohio put him over the top in the fight for the 270 electoral votes needed to clinch the White House and ended Romney’s hopes of pulling off a string of swing-state upsets.

Obama scored narrow wins in Ohio, Wisconsin, Iowa, Pennsylvania and New Hampshire – all states that Romney had contested – while the only swing state captured by Romney was North Carolina, according to network projections.

There was no immediate word from the Romney camp on the reported results, with some Republicans questioning whether Obama had in fact won Ohio despite the decisions by election experts at all the major TV networks to declare it for the president.

While Obama supporters in Chicago were ecstatic, Romney’s Boston event was grim as the news was announced on television screens there. A steady stream of people left the ballroom at the Boston convention center.

At least 120 million American voters had been expected to cast votes in the race between the Democratic incumbent and Romney after a campaign focused on how to repair the ailing US economy.

The same problems that dogged Obama in his first term are still there to confront him again.

He faces a difficult task in tackling US$1 trillion in annual deficits, reducing a US$16 trillion national debt, overhauling expensive social programs and dealing with a gridlocked US Congress that kept the same partisan makeup.

Obama’s projected victory will set the country’s course for the next four years on spending, taxes, healthcare, the role of government and foreign policy challenges such as the rise of China and Iran’s nuclear ambitions.

Each man offered different policies to cure what ails America’s weak economy, with Obama pledging to raise taxes on the wealthy and Romney offering across-the-board tax cuts as a way to ignite strong economic growth.

Whether both sides will be able to come together and craft a compromise is an open question as Republican congressional leaders vow to stick to their pledges not to raise taxes on anyone.

Inside Obama’s Chicago campaign headquarters, staffers erupted into cheers and high fives as state after state was called for the president.

Romney made last-minute visits to Ohio and Pennsylvania on Tuesday to try to drive up turnout in those states, while Vice President Joe Biden was dispatched to Ohio. Obama remained in his hometown of Chicago.

Republicans are likely to face questions about their ability to appeal to non-white voters as Hispanics, a growing minority, voted heavily for the president.

Democrat Claire McCaskill retained her US Senate seat from Missouri, beating Republican congressman Todd Akin, who stirred controversy with his comment in August that women’s bodies could ward off pregnancy in cases of “legitimate rape”.

Democrats gained a Senate seat in Indiana that had been in Republican hands for decades after Republican candidate Richard Mourdock called pregnancy from rape something that God intended. Democratic congressman Joe Donnelly won the race.

Former Maine Governor Angus King won a three-way contest for the Senate seat of retiring Republican Olympia Snowe. King ran as an independent, but he is expected to caucus with Democrats in what would amount to a Democratic pick-up.

FIFA Futsal World Cup: Do or die for Thailand and Paraguay