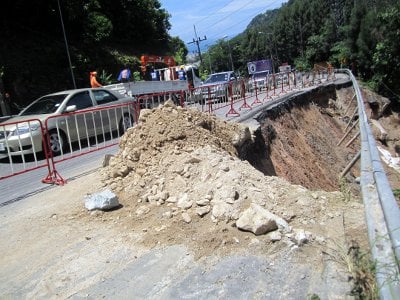 On September 27, the same site suffered another landslide, with the dislodged earth tumbling into a rubber plantation below.

No injuries were reported in any of the landslides.

The Phuket Highways Office spent 3mn baht making temporary repairs to the damaged section of road, shoring up the bank of earth that supports the road and resurfacing the tarmac.

However, with the tourism high-season fast approaching, the outside westbound lane remains closed, restricting traffic flow heading from Patong to Phuket Town to just one lane.

“Even though project has been approved by Cabinet, there are still procedural processes to complete. At this stage, I believe the budget will be given to us by March next year,” Mr Samak said.