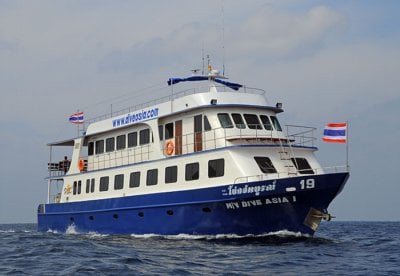 PHUKET CITY: Relatives of several European victims of the Choke Somboon 19 disaster off Phuket Island have yet to file insurance claims with underwriter AIG, which is waiting to pay out 200,000 baht for each of the deceased.

The seven victims – Swiss, German and Austrian – were covered under a mandatory group insurance policy taken out by Dive Asia Phuket, which owned and operated the vessel that sunk in heavy seas on the night of March 8 while returning from a dive trip to the Similan Islands.

Diva Asia has also received 200,000 baht and is arranging payment to the relatives of Japanese victim Yuba Hirotsuga.

AIG has tried to contact the embassies of the five European victims and will arrange payment once the necessary paperwork has been completed, he said.

“So far, neither the embassies nor the victim’s families have contacted AIG about the insurance. We want them to contact us soon because it is our policy to make such payments within one week after an accident. This is in order to maintain our good reputation,” he said.

AXA Insurance, underwriters of the ill-fated vessel, paid out an 18.5 million baht insurance claim to Dive Asia on April 28. A ceremonial check was handed over to Dive Asia Director Benno Bradon at the Phuket AXA Insurance branch.

Pinyo Khertguntapong, manager of the AXA Phuket branch, said the company two years ago began offering marine hull insurance, which covers the loss or damage of a vessel from gale, shipwreck or a variety of other maritime disasters.

Despite the Choke Somboon 19 tragedy, AXA still sees marine hull insurance as a growth market in Phuket and continues to offer policies, he said.

Due to the high costs, it was mutually agreed between Dive Asia and AXA not to try to salvage the 30-meter vessel, which now rests 70 meters below the surface about 12 nautical miles off Phuket.