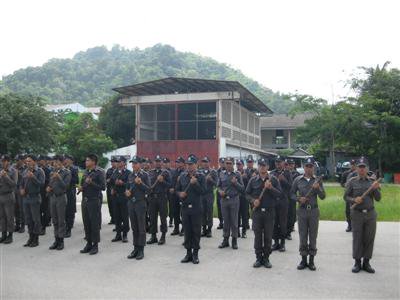 PHUKET CITY: It was a busy day yesterday at Phuket City Police headquarters, where some 300 officers began two days of special training in how to deal forcefully but effectively with large crowds and riots.

The training, ordered by Phuket Provincial Police Commander Pigad Thantipong, was in reaction to the political turmoil in the capital and other parts of the country.

It is also in preparation for the Asean Summit meetings, which the government hopes to host in Phuket in June, though no exact date or venue has yet been announced.

The training was conducted by Phuket Provincial Police Special Operations officers and other security specialists.

At about 7pm the same evening, some 200 officers stood in formation in front of the Phuket City Police headquarters to hear an address by Col Pigad, who ordered a fresh crackdown on weapons and illegal drugs in the Phuket City Police District, which covers the city itself as well as the villages of Wichit, Koh Kaew and Rassada.

The crackdown is in line with a regional directive issued by Region 8 Police Commander Lt Gen Santarn Chayanon to protect people’s lives and property.