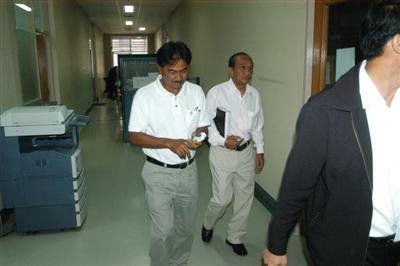 Mr Bumrung notified the DSI that he would present himself on May 26, but Lt Col Prawuth said he wants him to report “as soon as possible”.

The DSI informed the three suspects that the DSI has sufficient evidence to prove them guilty of encroachment on 13 plots of hillside covering a total of 500 rai in Koh Yao Yai Village 3.

The lengthy DSI investigation revealed that Land Department officials in 1978 illegally issued NorKorSor 3 title deeds on the land, despite it being part of a national forest reserve.

In 2006, the plots were sold to the Bangkok-based real estate development firm Naracha, which wanted to develop a hotel and villa project on the land with a marina at Klong Son Beach.

However, the company continued to clear hillsides in preparation for the resort and villa project. Residents of nearby Ban Yamee then claimed the developers dammed up a section of local watercourse for their own use, cutting off the village water supply.

Following complaints by the villagers to the DSI, investigators made more than ten visits to the project site and interviewed both local people and the developers.

In the end they determined that the original title deeds had been issued illegally and made formal charges against the four businessmen. If subsequent investigation reveals that Naracha knew the land title deeds were issued illegally, then the DSI will seek a court order to halt project construction, Col Prawuth said.

The DSI does not have the legal authority to issue a work stoppage order on its own, he added.

After the three men presented themselves and heard the charges, they were allowed to go free. They have been ordered to report to the DSI again on June 2 to give their side of the story.

As for the head of the Koh Yao District Land Office who issued the land title deeds, the DSI cannot charge him with a criminal offense because such cases have a statute of limitations of 20 years.

However, the DSI has already informed the National Counter Corruption Commission in Bangkok who can still take disciplinary measures against the official, who is still employed by the Land Office.