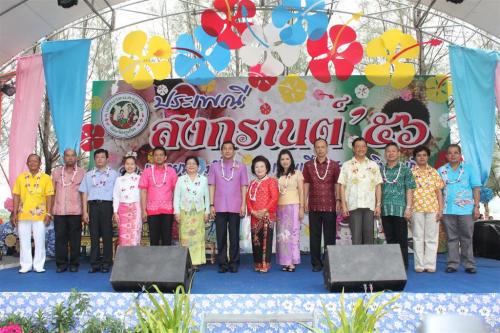 PHUKET: Hundreds of people gathered at Saphan Hin this morning to join a Songkran blessing ceremony to celebrate their Thai New Year.

Among the other leading Phuket figures to join the mass ceremony, offering alms to 399 monks, were Phuket Provincial Police Commander Choti Chavalviwat, Phuket City Mayor Somjai Suwansupana along with many other high-ranking Phuket officials, residents and tourists

In addition to making merit by offering water blessings, people released birds and poured water on a Buddha image at the site.

As part of the proceedings, Governor Maitri and Mayor Somjai took part in the traditional Songkran ceremony of blessing elders by pouring scented water on the hands.

Filipino caught with 7kg of crystal meth at Phuket Airport