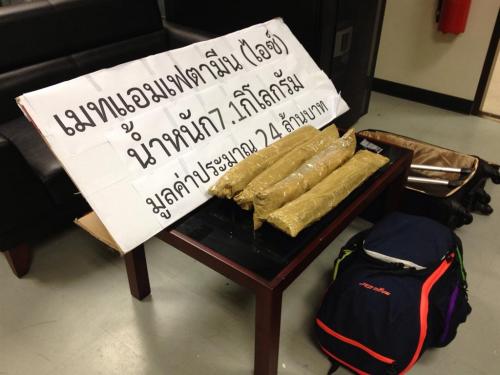 Officials estimated that the drugs netted had a street value of 30 million baht.

The suspect, identified by police as Sonny Pasong Cornel, 31, initially claimed he had no knowledge the bag he was carrying contained drugs.

However, he later recanted his claim and told officers in Bangkok that he was paid 75,000 baht to bring the narcotics into Thailand.

“Officials monitored him as his appearance matched the description we had received. While the suspect was passing through Customs, officers ordered him to open his bag as the x-ray of its contents seemed suspicious. We searched the bag and found the drugs hidden in the bottom of the bag, concealed by a black plastic sheet,” she said

Mr Comel was charged with illegally importing and possession of a category one narcotic with intention to sell and flown to Bangkok for further questioning by senior Customs officials at Suvarnnabhumi International Airport.

“At first he claimed that he had no idea the bag contained drugs, but when he was questioned in Bangkok he confessed that he was paid 75,000 baht to smuggle the drugs into the country,” Director Montira said.

“He claimed that he was hired by a male friend. He said he departed Delhi on a Malaysia Airlines flight on March 11. He reached Kuala Lumpur and then flew from Kuala Lumpur to Phuket, where he was arrested,” she added.