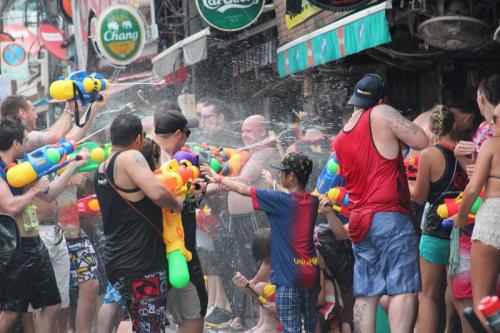 PHUKET: Phuket Governor Maitri Inthusut has called for all officers island-wide to make public safety their top priority during the Songkran celebrations, which unofficially started early in Patong late today.

Governor Maitri specifically ordered that extra officers be posted at the six official water-play zones on the island:

“More officers will be on duty and will pay specific attention to the water-play zones. Every department is called on to boost public safety,” Governor Maitri said.

“Brochures promoting safety tips will be handed out to motorists at police checkpoints across the island. I have also requested the Marine Police and Marine Office to inspect boats and their captains to make sure everyone will be safe during the holidays,” he added.

In Patong, more than 100 police officers will join volunteers in patrolling Soi Bangla and the beach road.

The five rules are:

“We will treat any other wrongful behavior case by case,” he added.

“Police will be targeting anyone who might cause trouble,” Col Chiraphat warned. “Anyone found breaking the rules and causing any trouble will be arrested.”