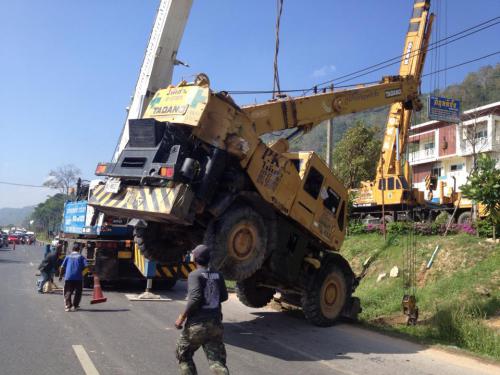 PHUKET: Officials have restored power supply along the bypass road, north of Phuket Town, after a crane toppled and brought down high-voltage power cables during peak hour traffic this morning.

“We received a report of a crane falling over at 8:29am. We have yet to learn what caused it to fall,” Phuket Provincial Electricity Authority (PPEA) Operations Chief Yongyuth Podbutr told the Phuket Gazette.

PPEA workers shut off power supply for more than an hour so the crane could be lifted to safety and damaged cables replaced.

“Power supply was restored at about 10:45am and traffic can now pass unhindered,” he added.

“We are now in the process of determining the cost of the damage to the power cables, which we were told would be covered by Kritichai Co’s insurer,” Mr Yongyuth said.