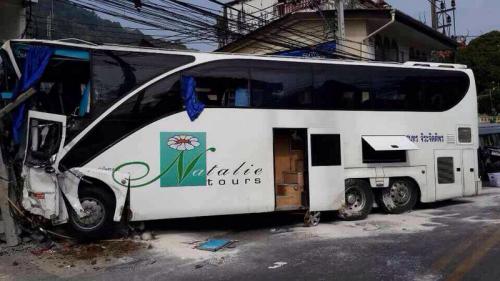 “Although we could not maintain zero deaths in Phuket during the Seven Days of Danger campaign, we are satisfied with the record for this year,” said Department of Disaster Prevention and Mitigation-Phuket (DDPM-Phuket) Chief San Jantharawong.

“It’s lower than last year, when we had nine,” he added.

This year the DDPM-Phuket office recorded a total of 28 accidents, which resulted in five deaths and 33 injured.

“Last year, we had almost the same number of accidents – 27 – with nine deaths and 24 injured,” Mr San told the Phuket Gazette.

“Last year, on average about 10 people died on Phuket’s roads each month. Considering that this was a holiday period with a lot more people on the island, we consider five deaths in a week to be not worse than expected,” he said.

“Officers were working day and night to check on motorists and make sure they would be safe on the road. In my view, we had a successful campaign this year,” Mr San added.

The Seven Days of Danger campaign began nationwide on December 27, and Phuket saw no deaths on the first two days. However, four people were killed on Phuket’s roads on Day 3, December 29.

At 4:28am, French national Sylvain Wacquez, 26, died in Rawai after his motorcycle slammed into a Toyota Fortuner making a u-turn. Mr Wacquez was not wearing a helmet and had a blood alcohol level of .35 per cent. The legal limit for driving is .05 per cent.

Less than an hour later, at 5:10am, Robert Marano, 21, a Thai motorcyclist, died in Thung Thong when he rode his motorcycle in the wrong direction and collided with a van. According to the police report, Mr Marano was not wearing a helmet and registered a blood-alcohol reading of .37 per cent.

On the afternoon of the same day, two people lost their lives when a tour bus raced out of control down Patong Hill. Panthida Jaruwat, 40, a tour guide on the bus, and Khanrat Kajornjit, 47, the driver of a car struck by the bus, were killed (story here).

The following day, December 30, a 19-year-old motorcyclist, Thanawat Tohting, was killed in Thalang as he rushed to make it through a yellow traffic light, lost control and struck a traffic light pole (story here).

On New Year’s Eve and New Year’s Day, no road deaths were reported in Phuket.

Although the Seven Days of Danger campaign began nationwide on December 27, Phuket Governor Maitri Inthusut, noting the importance of road safety over the new year holidays, launched his “10 Days of Danger” campaign on December 25. Today is the final day for that campaign.

Police at static checkpoints during the Seven Days of Danger campaign reported stopping and checking 44,882 vehicles and citing 2,666 motorists for various traffic offenses. Last year about a third that number were stopped – 16,882, but the number of citations was much the same: 2,609.

Special Report: A nation at the crossroads