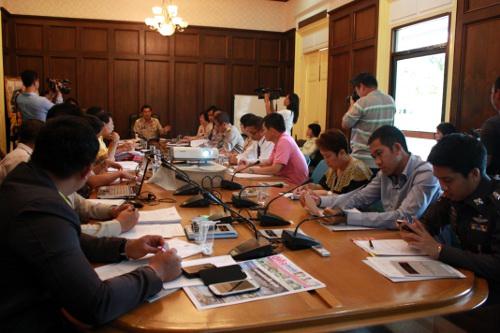 PHUKET: An inspection team from Bangkok will be arriving in Phuket to help local officers investigate businesses with foreign owners that are suspected of using nominee shareholders, Phuket Governor Maitri Inthusut announced at a meeting this afternoon.

About 3,700 “foreign-owned” business are registered in Phuket, explained Department of Business Development Phuket Office chief Nimit Kangkajit at the meeting.

In addition to any businesses suspected of being run with the help of Thai nominees, investigations will be launched into all businesses with foreign owners across the island engaging in professions reserved for Thais only, Governor Maitri explained.

“I have ordered that three teams, each headed by a Phuket vice governor and comprising officers from a variety of relevant departments inspect ‘foreign-owned’ businesses in all three Phuket districts: Muang, Kathu and Thalang,” Governor Maitri said.

These businesses will be examined to establish whether or not they are engaging in any of the work reserved for Thais only, explained Phuket Provincial Employment Office (PPEO) chief Yawapa Pibulpol.

“Activities we are especially concerned about are guiding services, laundry services and tour van operations, as well as timeshares sales,” Ms Yawapa said.

Already during the recent crackdown, instigated by a taxi mob in Bang Tao on January 28 (story here), five companies with foreign owners were found breaching regulations and were fined, Ms Yawapa added.

Governor Maitri also explained that the teams will be encouraging locals to report any information that might lead to identifying companies with foreign owners that are breaking laws in The Kingdom.