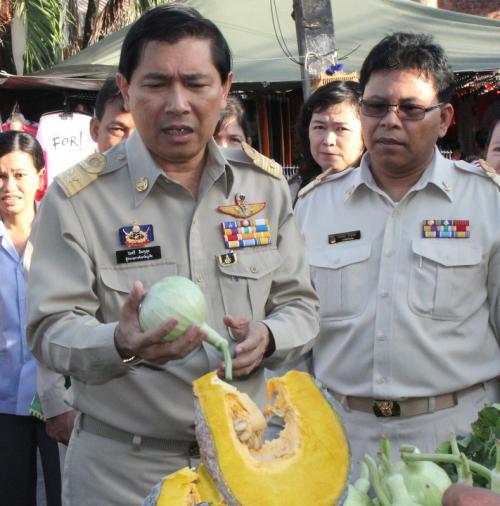 PHUKET: A market vendor at the busy Kaset Market in Phuket Town yesterday told the Phuket Governor the 300-baht-a-day minimum wage was forcing vendors to pass on price hikes of fresh produce to consumers.

The purpose of the visit was to prevent gouging ahead of the Chinese New Year festivities, which begin on February 10.

During his walk-through of the market, Governor Maitri noted that vegetable prices were on the rise. “Most vegetables have jumped 5 to 10 baht. Kale and Chinese kale were 25 baht per kilogram, now they are 35 baht per kilo,” he remarked.

“Fruit prices are increasing, too – especially oranges, as they are believed to be auspicious during Chinese New Year. Oranges are now 5 baht more a kilogram. They were 75 baht, but are now 80 baht per kilo. The price of green apples has also jumped, to 18 baht each; before they were 15 baht apiece,” he said.

Gov Maitri predicted the prices of other fruits would follow suit, notably fruits used as auspicious offerings during Chinese New Year ceremonies, such as bananas, pears and grapes.

To this, fruit vendor Sakorn Ngarnwongpanit countered, “So far, only orange and apple prices have increased for the upcoming Chinese New Year, but it is like this every year – prices rise in response to rising demand.”

Yet, non-vegans were also being hit by rising meat prices, the governor noted.

“Pork has increased by 10 baht, and is now 130 baht per kilogram, but the price of chicken has yet to increase,” Governor Maitri said.

Pork vendor Choompol Sae-Ng blamed the 300-baht minimum daily wage set by the government as the reason for the price of raw meat rising.

“A lot of people are complaining about the price of food going up, and saying that they have to buy it even if the prices do go up. It is because of the 300-baht minimum wage set by the government . The cost of production has increased, and so the prices have increased,” he said.

Mr Choompol warned that further price rises may be on the way, and that vendors will be forced to pass any markups made by produce suppliers on to consumers.

“We are keeping an eye on the prices. If pig farms raise their prices, then we will have to raise ours too,” he said.

Despite his concerns over the rising prices, Governor Maitri noted that all the market stalls inspected were selling fresh produce at prices still under the maximum prices regulated by the Department of Interior Trade.

For more on the Phuket cost of living, consumer food trends, and to find out how to reduce the burden of rising prices in Phuket, pick up a copy of the Phuket Gazette, on stands this Saturday.

Phuket to crack down on businesses using nominee shareholders