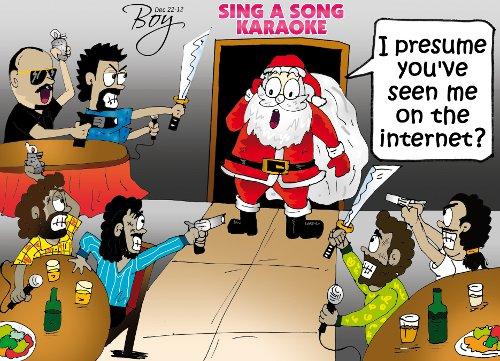 PHUKET: With the holiday season upon us, we would like to encourage all of our readers to take a few moments to pause and reflect on how lucky we are to live in this incredible age of technology.

Technology is perhaps the most notorious of double-edged swords. Shakespeare wrote famously in Hamlet that “…there is nothing either good or bad, but thinking makes it so.”

That statement reflects a healthy skepticism, but it might be a difficult task to sell the idea that guns are “neither good nor bad” to the residents of Newtown, Connecticut, many of whom had to bury their beloved young children last week.

The incomprehensible murder of 26 people – mostly kindergarten students – at a school in that town continues to shock the planet.

Most of the civilized world is united in disbelief at how easily US citizens, including the mentally-deranged, can acquire the kind of arsenals needed to carry out attacks like this and the others that came before it.

The continuing incidence of random mass murders has also caused many to question the role of the media in reporting on such events. As impractical as it may be, some have even suggested that traditional media should somehow conspire to “play down” or even stop reporting such events in order to deny potential mass murderers the “attention” they are said to be seeking when carrying out these attacks.

Despite the planet’s unsustainable rise in population growth, we are nevertheless slowly developing a global popular culture based largely on the Internet. Quite often the trends are harmless memes, like “planking” or dancing “Gangnam style”, but in many cases they can be dangerous, if not outright deadly. “Cyber-bullying” resulting in suicide, the empowerment of pedophilia rings, child abductions and the spread of bomb-making technology are just a few of the results that can arise when the nefarious become Internet-enabled.

Here in Phuket, the case of Samudchaya “Nong Pin” Yanpunya, who was only 12 years old at the time she went missing from an internet cafe late last year, is just one example. Her mother fears she may have been abducted by someone she met online during a Facebook session – though her true fate remains a mystery.

It might be easy to dismiss mass murder attacks as an internal problem for the US, but the reality is that the disease is spreading to Europe and China, through the Internet, of course, And we have all the ingredients right here in Thailand for similar tragedies to occur – most notably the wide-open access to black-market firearms and the ease with which so many citizens are influenced by others, as manifest in the spread of drugs, corruption and the spontaneous formation of mobs.

As is so often the case, the first, best and maybe the only line of defense against these and so many other social ills is good parenting. With that in mind, the Gazette would like to extend the warmest of holiday wishes to all of our readers and their families.

Phuket Opinion: Santa says a smile is the best Christmas gift of all