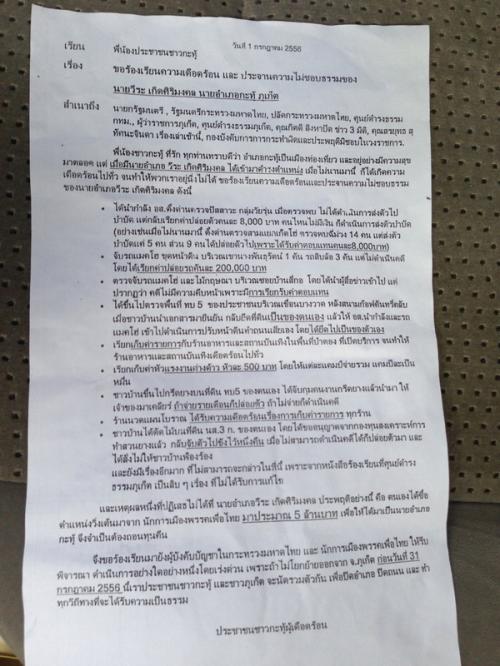 PHUKET: Kathu District Chief Veera Kerdsirimongkol has denounced accusations claiming that he accepted cash from drug suspects to overlook test results and that he attempted to extort money from developers by holding their machinery for ransom.

Chief Veera flatly denied the allegations: “I have never sought benefits, money or otherwise, to release drug suspects. It’s not true, and all the other things the handbills say are not true.”

The accusations were printed on handbills being circulated throughout Kalim, Kamala and Patong. Many of the leaflets were found strewn along the side of the road between Kalim and Kamala on Sunday morning.

“Mr Veera had police set up a checkpoint to test teenagers for drugs. When some teenagers tested positive, the teenagers were asked to pay 8,000 baht to avoid being sent to a mandatory drug rehabilitation program,” the handbills allege.

The leaflets, printed only in Thai, also accuse Mr Veera of seizing a backhoe at one location and three 10-wheeled trucks on Big Buddha hill, but not pressing any charges. Instead, he asked for about 200,000 baht to have the vehicles returned, the handbills alleged.

The leaflets called for the Ministry of Interior to remove Chief Veera from office by July 31.

“Or else there will be protests to close the road and the Kathu District Office and we will do every thing we can to get justice,” the writers warned.

Chief Veera remained undeterred by the allegations and vowed to continue his fight against land encroachment and drugs.

“I have even posted one of the leaflets at the Kathu District Office so everyone can read it,” he said.

“I believe the handbills came from someone who lost out due to my investigations into illegal deforestation and encroachment on protected forest areas. These investigations have doubtless cost some people a lot of money,” he said.

Police at Patong, Thung Thong and Kamala have been asked to identify and arrest those responsible for creating the documents and distributing them.

“Police have found CCTV footage showing the handbills being thrown from a black car in Soi Kathu Waterfall at about 1am on Sunday… After the car exited the soi we couldn’t see where it went,” Chief Veera said.