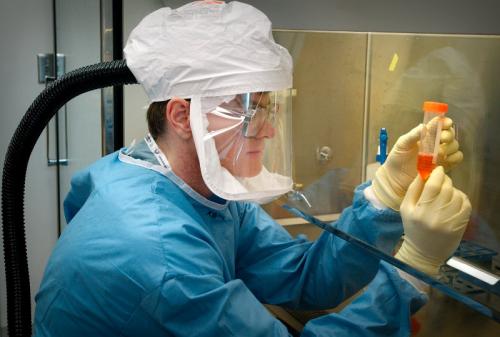 MIDDLE East Respiratory Syndrome (MERS) was first identified in Saudi Arabia in September last year. At least 80 people have since contracted the disease; 44 of them died. The most recent deaths, both in Saudi Arabia, were diagnosed on June 28. Both patients were dead five days later.

MERS spreads more easily than its relative, the notorious SARS virus, and is clearly more likely to kill. But is it too early for Phuket authorities to worry about MERS?

PHUKET: The Health Ministry on Friday staged a press conference at Phuket International Airport to assure the public it was taking Middle East Respiratory Syndrome, better known by its acronym MERS, seriously.

“Although this disease has yet to be identified in a patient in Thailand, we have to be prepared in order to prevent an outbreak here,” said Dr Narong Sahametapat, permanent secretary of the Ministry of Public Health.

Major hospitals in key tourist areas have been ordered to set up rapid-response teams and a pressurized treatment room dedicated to patients suspected to be carrying MERS, he added.

“I have also ordered special laboratories be set up so we can quickly identify whether or not a patient has contracted the virus,” Dr Narong said.

Any patients found to have MERS will be isolated from the general population.

“We will question where they have travelled, with particular attention to those who joined the Hajj in Mecca. If the patient has just returned from Saudi Arabia, we will call in and test all Hajj pilgrims,” said Dr Narong.

The MERS protocol laid down on Friday echoed the advice of the World Health Organization (WHO), which also on Friday announced that it will set up an emergency committee tasked specifically with drawing up an international response plan – to be called “International Health Regulations” – to counter an outbreak of MERS (click here for the US Centers of Disease Control list of cases since April 2012).

The last time the WHO set up an emergency committee was during the H1N1 swine flu pandemic in 2009. The first time the WHO drew up International Health Regulations was in 2007, in response to the deadly Severe Acute Respiratory Syndrome (SARS) pandemic.

The announcement of the Thai Health Ministry’s MERS protocol on Friday also follows Thailand’s Public Health Minister Pradit Sintavanarong on June 24 ordering all health offices in key tourism areas to be on the alert for MERS (click here to see WHO factsheet).

Mr Pradit said Bangkok, Chiang Mai, Chonburi, Phuket and Khon Kaen were ordered to be on especially high alert, with laboratory systems to be set up in the Medical Sciences Department’s 14 centers nationwide for fast and accurate diagnosis of the disease.

The rising interest in MERS trends with the rising incidence of MERS, which was first identified in Saudi Arabia in September last year. Since then, MERS has been found in Middle East patients in Jordan, the United Arab Emirates, Qatar and Tunisia.

Cases have also been reported in France, Germany, the United Kingdom and Italy. One of the two MERS patients in France died, as did two of the patients in the UK.

The virus – which induces the same symptoms as the common cold: fever, coughing and shortness of breath, but more severe – has so far baffled scientists.

“We understand too little about this virus when viewed against the magnitude of its potential threat,” she said in Geneva in May.

In accordance with Mr Pradit’s call for Thai health officials to be on alert, Phuket Provincial Public Health Office (PPHO) chief Bancha Kakong attended a two-day meeting in Bangkok on June 26 and 27 to come up with appropriate measures to prevent MERS from arriving in Thailand (click here for advice to travellers concerning MERS).

However, even before that meeting, the Phuket Health Office had already taken precautionary steps, explained Areeya Panchaipoom, the PPHO’s Disease Control Group specialist.

“We have already instructed hospitals and even local community health clinics to be on alert for anyone with extenuating symptoms of influenza and report any such cases to us,” she said.

Of particular concern are the thousands of Thai Muslims who will travel to Saudi Arabia to perform the Hajj in September and October, Ms Areeya said.

“Until we receive new instructions from Bangkok, we are maintaining our standard practice of having Hajj pilgrims receive influenza and anti-meningitis vaccinations before they depart for Mecca.

“We have also asked the Phuket Islamic Office, which organizes the Hajj charter flights, to warn pilgrims about MERS before they leave and to recommend they seek medical assistance if any of them experience unabated symptoms of influenza,” she added.

Pamphlets in Thai, English and Arabic will be handed out to warn Hajj pilgrims of the dangers of MERS and what symptoms to be aware of.

“We have also told officers at the airport to report any passengers who appear to be suffering from a severe cough or are having difficulty breathing,” Ms Areeya said.

Despite recognizing that 8 million foreigners passed through Phuket Airport during the past year and that four flights a week now arrive direct from the Middle East, Tourism Authority of Thailand (TAT) Phuket office Director Chanchai Doungjit said it was too early to be worried about MERS.

“We are aware of MERS. It was raised at the regular monthly meeting between AOT [Airports of Thailand] and the Phuket TAT office. They said they are ready to take any action if needed, but so far no new security measures have been implemented,” he said.

Mr Chanchai added that he was not yet worried about the growing number of European travellers who arrive in Phuket via the Middle East. “Passengers who are transiting [in the Middle East] cannot leave the airport, and hence cannot mix with the general population, meaning they have a much lesser chance of contracting the disease,” he explained.

“Also, I have faith the CIQ [Customs, Immigration and Quarantine] officers at the airport will catch any infected people arriving in Phuket,” he added.

“The virus may be spreading, but there is no need to panic. MERS has not reached epidemic levels and we are already looking at what steps we can take to stop it from arriving here… As we have seen in the similar SARS situation in the past – no SARS was found in Phuket. Our health officials dealt with that situation competently.

“I am not worried about MERS because I am confident that Phuket officials can prevent MERS from arriving in Phuket,” Mr Chanchai said.

According to the Phuket Tourist Association (PTA) in 2003, the height of SARS cost the Phuket tourism industry an estimated 2 billion baht a month (story here).