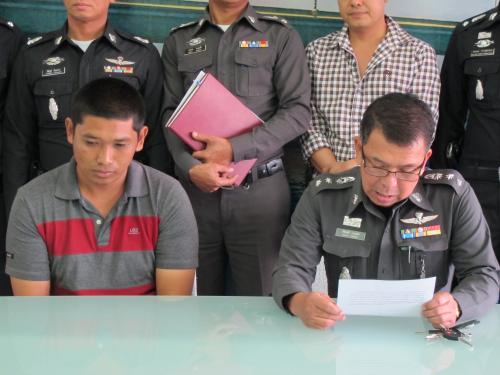 PHUKET: A man who suffocated his mother-in-law after an argument in Phuket confessed to the killing several hours after the horrific encounter.

The body of Prayad Phawaphutanon, 50, was found half-clothed and lying on her bed by her 14-year-old son when he returned from school yesterday evening, said Thalang Police Superintendent Sirisak Wasasiri today.

“After finding his mother dead in bed, he called his father and his father reported it to us,” Col Sirisak said.

Mrs Prayad’s son-in-law Anun Mahasit, 28, confessed to police that he had killed her in a fit of rage after she had insulted him for not having a job.

“We assumed that the murderer had to be someone close to the family, since he was able to walk in and out of the house freely,” Col Sirisak said.

Mr Anun was asked to come to the station for questioning.

“We found scratches from finger nails on his arm, and were quickly able to secure a confession from him,” Col Sirisak said.

After having sent his wife to work, Mr Anun said that he walked past Mrs Prayad’s house. At the time she was wearing a shirt and a sarong wrapped around her waist and was washing dishes.

“When she saw me, she started to hurl insults at me again about not having a job and about stealing valuables from her house. I was furious,” Mr Anun said. “I followed her inside the house – she didn’t notice me.”

Mr Anun explained that once inside, he followed Mrs Prayed into the bedroom. He then ripped the sarong from her waist and wrapped it around her neck, pushing her face down into the bed.

“I pressed her head into the pillow until she was dead,” Mr Anun said.

Police made it clear that there were no signs of sexual assault on Mrs Prayad’s body.

“After that, I went to my friend’s house in Thalang. My wife called me at about 6pm to pick her up from work and told me about the death of her mother. I pretended not to know anything about it until I was invited down to the station for questioning,” Mr Anun said.