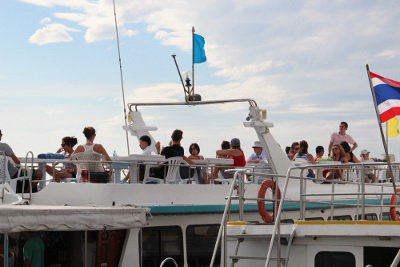 PHUKET: As the Seven Days of Danger road-safety campaign continues across Phuket, the Marine Police are joining the effort on the water by stepping up safety checks and deploying vessels to conduct 24-hour operations.

The moves comes as Phuket struggles to accommodate the huge influx of tourists who have arrived for the island’s “peak season” in tourism, a period that begins just before Christmas and continues into the New Year.

As is usual for this time of year, the Gazette is receiving reports of near 100 per cent occupancy at hotels and other forms of tourist accommodation located along Phuket’s west coast, especially in the prime tourist beach areas of Patong, Karon and Kata.

To cope with the rising number of people who like to avoid the crowds by heading out to the islands in Phang Nga Bay, including Phi Phi and Koh Yao, extra boat services have been launched at Rassada Pier on the east side of Phuket Town.

Lt Col Rittee Phao Phan, commanding officer of the Phuket-based Marine Police Region 8, launched the water-safety campaign by leading a sortie of Marine Police officers to the Rassada Pier to deliver water-safety advice to operators and hand out safety brochures to tourists traveling to the nearby islands.

“Phuket Marine Police are responsible for the waters around Phuket and some areas of Phang Nga Bay. Passenger safety is our priority. This means ensuring there are no overloaded boats out on the water and that every passenger is wearing a life jacket,” Lt Col Rittee said.

Marine Police have been assigned to look after tourists during the new year 24 hours a day. “We have also opened a 24-hour emergency hotline 196 to be operational during the Seven Days of Danger – from December 29 to January 5,” Lt Col Rittee said.

“We will have inflatable dinghies and Marine Police vessel Khun Pum [Tor 814] to patrol around Rassada Pier, the entrance to the Boat Lagoon marina, and Patong Bay. We will be on high alert in these areas during the New Year’s Eve countdown,” he added.