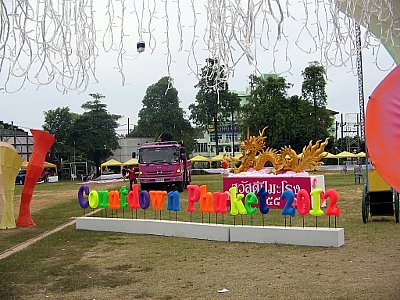 PHUKET: One would guess that quite a few of Phuket’s residents were up well past their usual bed times last night as 2011 slipped into history and 2012 dawned.

It’s probably likely that for an equal number it was business as usual, with 3am considered a respectable time for turning in.

Regardless, what to do now that those long made resolutions have finally come into effect? Quit smoking, cut back on the drink or perhaps take up a sport – all very noble aspirations. However, before becoming a hermit to avoid all the distractions waiting to lure one back into old habits, perhaps there’s time for one last blast.

If you’ve had enough of the usual Phuket venues then the Red Cross Fair might be of interest.

The Fair started on December 29 and runs through to January 8, 2012 at the central stage in Phuket Town. Nightly performances include nationally-renowned acts.

As in years past, the most anticipated event will be the charity lucky draw and its many prizes on offer. This year one lucky person will be driving away the first prize, a Honda City car.

Apart from the evening entertainment, the fair will also feature many stalls selling food and beverages, souvenirs and household goods at discounted prices.

Wherever you decide to go and whatever you do, enjoy a safe and happy New Year.

A New Year’s message from the Phuket Governor