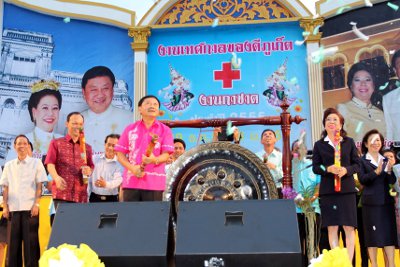 PHUKET: Scores of people turned out last night the opening night of the Phuket Red Cross Fair in Phuket Town, with many people among the huge crowd hoping to win the top prize in the popular lucky draw: a brand-new Honda City car.

The 11-day fair, being held at the Central Stage Area at Saphan Hin, was declared officially underway by Phuket Governor Tri Augkaradacha, who handed out 50 wheelchairs to disable people and 88 scholarships to students from poor families.

Tonight, the countdown to the new year will begin on the main stage at 11:30pm.

The fair has long proved very popular with tourists and residents, each year attracting tens of thousands of visitors from across Phuket for the annual event.

Hundreds of stalls sell local delicacies, knickknacks, clothing and a huge variety of other items, while entertainment is provided by activities and performances from Thailand’s top celebrities.

However, without doubt one of the biggest attractions over the years has been the lucky draw.

“I come here every year and I always buy a ticket for the Red Cross lottery. I hope to win the grand prize,” local resident Saowapa Nathi-ngam told the Phuket Gazette.

“Although I have never won, at least I know that all the money I paid for my ticket will be used for charity,” she added.

In addition to a brand-new Honda City car being this year’s top prize, other prizes include a motorcycle, gold necklaces, refrigerators, televisions and much more.

The draw for the grand prize will be held on the Central Stage at 10pm on the closing night of the fair, January 7.