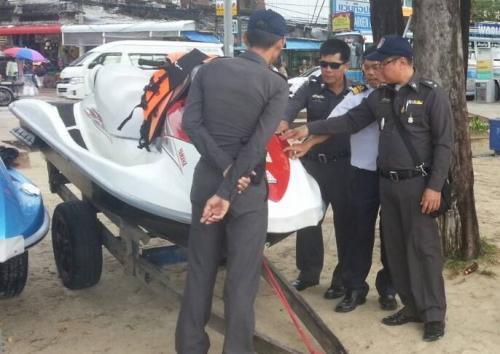 Officers from the Phuket Marine Police also seized two jet-skis being rented out to tourists with expired registrations.

The officers arrived unannounced at the popular beach to “pee-test” 15 jet-ski rental operators and speedboat staff operating at the beach.

“One of the 15 men, Wutthipong Thepwongsa, tested positive for drugs and was handed over to Patong Police for further investigation,” Lt Col Chatchai Sakdee of the Phuket Marine Police told the Phuket Gazette.

“The highest penalty for operating an illegal jet-ski is a 10,000-baht fine,” Col Chatchai told the Gazette today.

He added that yesterday’s exercise was the fourth such raid this month.

“One of the raids this month was at Kata Beach and the other three, including this one, were at Patong Beach,” Col Chatchai said.

Further raids will be conducted at other beaches where jet-ski operators work, he added, naming Patong, Kata, Karon, Bang Tao, Kamala and Koh Naka off the east coast of Phuket as key areas of interest.