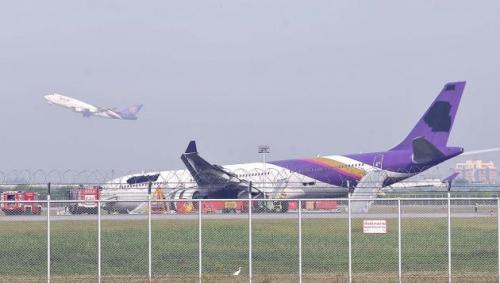 
Bangkok flight delays continue
The Nation / Phuket Gazette
PHUKET: Passengers flying out of Suvarnabhumi airport in Bangkok can expect inconvenience and delays until a runway damaged by a crash landing by a THAI flight late on Sunday night is opened again tomorrow. Work is now being done to salvage the damaged plane and repair the runway pavement.

In a statement early yesterday, Thai Airways president Sorajak Kasemsuwan said the landing seemed to be routine until pilots detected a fault in the landing gear, before the aircraft skidded to the right on touchdown.

“Initially it was probably the front landing gear that broke, but a further investigation is needed to find out the cause,” he said. The engine having a problem did not catch fire, but only caused sparking.

In a detailed statement later, Sorajak said the incident was beyond the pilots’ capacity to control. The plane, which is 18 years old, underwent a full inspection and routine maintenance before the flight began. It had had an overhaul in April, while the pilots had 14 years of experience.

He apologised to passengers on board the flight and to people who were inconvenienced.

The worst injury sustained by a passenger, a Chinese national, was a broken wrist, he said.

Sorajak said he visited all four passengers at two hospitals and that their treatment costs would be covered by THAI. The Chinese passenger with a broken wrist would be given a free air ticket back to China, and expenses if he returns to Thailand for a possible future trip, as his trip was spoiled because of the accident and injury.

Sorajak said black paint was put on the THAI logo at the back of the plane to cover it, as part of accident procedure. And certain cabin crew left the aircraft before passengers to prepare cushion ladders on the ground, as part of standard safety procedure – not to escape, as claimed in passengers’ complaints that circulated on social media.

THAI later said passengers in economy class would be given US$100 (Bt3,219) for delays in delivering their luggage, and those in business class would get $200.

Sorajak said injured passengers would be compensated while all 288 onboard would possibly get an extra payout to make up for the inconvenience. All luggage would be given to them at their hotels or accommodation where they are staying, and belongings left in the cabin were being retrieved, with policemen present as witnesses to ensure nothing went missing or was stolen.

Airports of Thailand (AOT) president Sita Divari said around 200 flights would face delays during the 48 hours that Runway 19 L was closed, while the Airbus 330-300 is salvaged.

Meanwhile, the five-hour job to repair the runway would cost around Bt1 million. That would be paid by THAI, and the work done at the same time.

Sita said all airlines had been informed of an AOT offer that they could switch to use Don Mueang as an alternative airport during this time, but none wished to do so.

The crash of flight TG679 caused delays to 99 airborne flights waiting to land for an average of 15 minutes while delaying 106 departing flights, for an average 30 minutes, from the time of accident at 11.20pm on Sunday night till 1.30pm yesterday afternoon.

Flight TG679 carried 288 passengers including one infant and 14 crew. All up, 12 passengers sustained injuries, including shock and people who choked on thick smoke or fainted.

Department of Civil Aviation director-general Worradej Harnprasert said an initial in-house investigation found that the rear starboard landing-gear broke. A further investigation using in-flight details from the black box, to begin today when the unit is expected to be retrieved, would conclude the cause of the drama.

He said airport fire engines scrambled to put out a blaze caused when the fuselage dragged over the runway. His statement contradicted Sorajak’s about fire burning the aircraft, but there were several passengers who reported choking on smoke inhaled during the rescue.

“BEFORE LANDING, the pilot announced that the plane would be parked a fair way from the terminal building because the runway was under construction. Everything was normal while landing, then there was a sudden brake.

Looking out of the window from my first-class front-row seat on the far-right, I saw two pieces of metal fly by and realised that we had had an accident. “The plane slid off the runway into the soft ground and there was a smell of something burning. Then I heard someone scream ‘Fire! Fire!’

“The pilot ordered emergency exits to be opened and released the rubber slide for passengers to flee the plane. We were all instructed to run as far away from the plane as possible.

“I suspected something was wrong with the wheels and, looking back, I saw smoke with fire engines spraying water onto the plane I hurt my back a bit sliding down the rubber slide.

“This is the first such incident in my life. THAI later got passengers to register their names so their luggage can be delivered to them later.”

“My group was returning from a tour in Guangzhou on this flight and we were sitting near the emergency exits. During the flight, I joked with my friends and the air-hostess what would happen if the exit popped open in case of emergency. A friend of mine cried that she was terrified of a plane crash.

“As I talked to a steward, I heard a loud bang and then a foreigner was heard yelling ‘Fire! Fire!’ That’s when chaos broke out.

“I didn’t think my joke would come true. Everything happened so fast and [we] slid out via the rubber slider [exit ramp]. I was only slightly injured from being pushed.

“This is the most frightening thing that has ever happened to me – it felt like I died and came back to life just before my 33rd birthday this month.”.


Panel opts to double rubber subsidy
The Nation / Phuket Gazette
PHUKET: The National Rubber Policy Committee has decided to double the subsidy for rubber growers from Bt1,260 per rai to Bt2,520/rai for seven months, from September 2013 to March 2014, said Deputy PM and and Finance Minister Kittiratt Na-Ranong announced yesterday.

As the panel’s chairman, Kittiratt said the new rate would be provided for up to 25 rai per case. The proposal will be submitted to the Cabinet today. He said the new rate would hike the budget for subsidy from Bt10.644 billion to Bt21.209 billion, adding that this assistance was on the principle of helping the farmers’ production and not as an intervention in the para-rubber market mechanism. The price of rubber currently is Bt78/kilo.

Earlier yesterday, Deputy PM Pol General Pracha Promnog insisted that the government was committed to the previously agreed price of Bt90/kg for ribbed