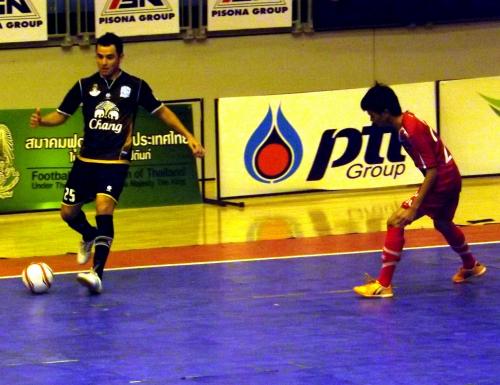 The victory was the Andaman Pearl’s fifth in a row, and was both side’s 28th game of the 30-fixture GMM Sport Thailand Futsal Premier League (TFPL) 2012-2013 season.

Played at the 4,000-seat Saphan Hin Indoor Sports Complex, the match was watched by about 1,000 energetic fans.

Jackson Santos scored his 30th and 31st goals of the season to put Phuket into a two goal lead early in the match.

Phuket scored two more goals in the second half through Teerachit Jantamat in the 35th minute and a counter attack that led to Marcos converting a pass from Anurak Phetluan in the 36th minute.

The visitor’s consolation goal was scored by Sumin Booncharoen in the 36th minute.

The convincing win against Samut Prakarn Futsal Club follows three consecutive home wins against Nonthaburi, Surat Thani and Prachin, as well as another away win to Samut Songkhram, bringing the island’s pro futsal team’s winning streak to five in a two week period.

Although immediately moving up into 5th place after the game with 45 points from 15 wins, 13 losses and a goal difference of 10, Phuket United on Sunday dropped to 6th place after CAT FC seized the fifth place spot from their 2-0 victory over Navy.

Phuket United have two more matches remaining this season, which will both be played in Bangkok.

Phuket lost to both teams in their previous meetings, earlier this season.

Other TFPL results this weekend