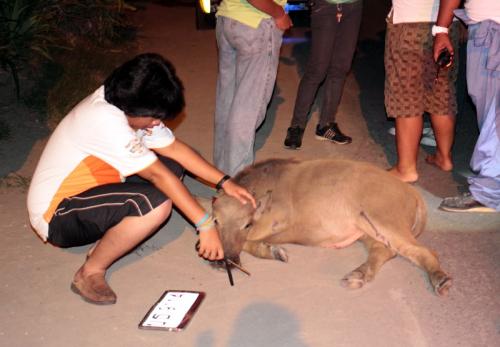 PHUKET: A pickup truck struck and killed a young buffalo and then drove off north of Phuket Town on Saturday night, but authorities say the buffalo’s owner was at fault.

“In this case, the owner of the buffalo must pay for the damage to the pickup truck,” Phuket City Police chief Col Sermphan Sirikong explained to the Phuket Gazette.

“He is at fault because did not keep his buffalo from wandering. He should not let them walk on the road.

“However, we cannot press charges since no person has claimed ownership of the herd,” he said.

Kusoldharm Rescue Foundation workers received a call at 12:30am that a baby buffalo was wounded on Pracha Samakee Road, which runs parallel to the northern section of the bypass road in Rassada (map here).

“Witnesses said a herd of buffalo were crossing the road and the pickup driver stopped his car to let them pass. As he started to drive off, a baby buffalo suddenly ran across the road. The driver could not stop in time, and so he hit it,” a Kusoldharm Rescue worker explained.

“He drove off toward Baan Samkong after that,” he stated.

Rescue workers arrived to find a female baby buffalo about three months old lying on the road. Her right legs were broken. She was bleeding from the nose and her horns were broken.

“We tried to save the buffalo, but failed. She died soon after we arrived,” the rescue worker said.

“Not far from the buffalo, we found the Phuket license plate [Bor Tor] 9114 on the road,” he added.