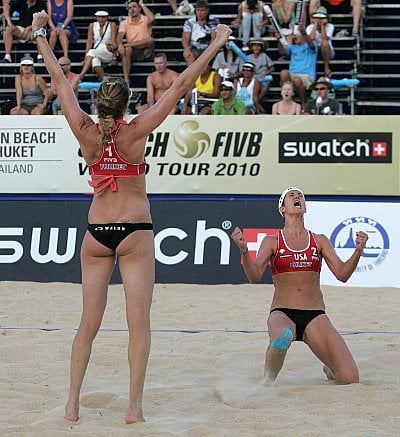 PHUKET: Marta Menegatti and Valeria Rosso defeated Brazilians Carolina and Maria Clara Salgado in a semifinal match in the US$190,000 Phuket Thailand Open to become the first Italian team to ever compete for a gold medal on the FIVB women’s beach volleyball world tour.

Their opponents will be Americans Nicole Branagh and Kerri Walsh, who swept Sanne Keizer and Marleen Van Lersel of The Netherlands in the other exciting semifinal.

The free-admission final matches start today at 3pm on the center court at Karon Beach. All are welcome to attend.

The matches which will be broadcast around the globe.

Menegatti and Rosso seemed an unlikely team to reach the gold medal match, given that that they hadn’t played together before last week and that no Italian team has ever played in a gold medal match.

In fact, Menegatti was signed up with a different partner and Rosso had no plans to compete here. But Rosso set out her goals early in the tournament.

“I told Marta, ‘We lost in the first match, now let’s go for a medal’,” Rosso recalled.

“It’s fantastic to be the first Italian team playing for the gold medal,” said the 20-year old Menegatti. “We didn’t expect that but we did our best to get here. We always fight, and tomorrow we want to win.”

The Italians finished in seventh place last week in Sanya, China after having practiced together just two days before that event. Menegatti’s regular partner, Greta Cicolari, is injured and Rosso stepped in at the last minute to take her place.

Branagh and Walsh are playing together for just the third time, having won an event in 2008 before placing fifth last week.

Both of them have already won two medals in Phuket. In the first year of competition here in 2006, Walsh won a bronze and then followed that up with a gold in 2007 after beating Branagh. Branagh won her second silver in 2008, and neither player was here last year.

The United States leads all countries having won seven of the 12 medals in Phuket, including placing 1-2 in the last three Karon Beach finales.

Italy joins China and the US as the only countries to play in any of the Phuket title matches.

The Phuket Gazette and its television arm PGTV are charter sponsors of this event.