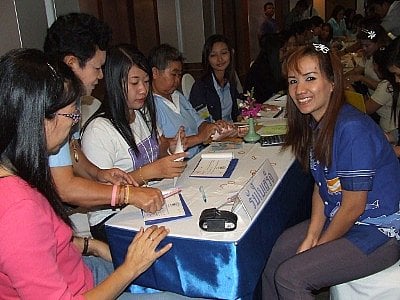 PHUKET: Hundreds of people descended on the Phuket Merlin Hotel in Phuket Town yesterday to donate items for flood relief.

The hotel meeting room was overrun by people handling the donations, while more than a hundred donor organizations were setting out their stockpiles in the car park.

With Phuket Governor Tri Augkaradacha at the helm, many lent a hand stowing the items on trucks bound for Thailand’s flood-stricken provinces, both north and south.

A truck laden with relief items left for the flood-affected southern provinces at about 3pm, while another loaded with the bulk of the items departed for Bangkok at 5pm.

Some of the items will be delivered directly to flood victims in the south; others will bolster Red Cross projects.

Many of the items will be delivered to a central flood-relief collection center in Bangkok where they will be distributed to flood victims throughout the country.

The huge piles of necessities had been collected mainly by organizations, ranging from government agencies and private businesses to foundations and educational institutions.

Among the long list of those who acted as donation collection points were Jungceylon, Phuket Rajabhat University, the Third Naval Area Command, the Rotary Clubs of Phuket, and the Karon Sea Sands Resort & Spa.