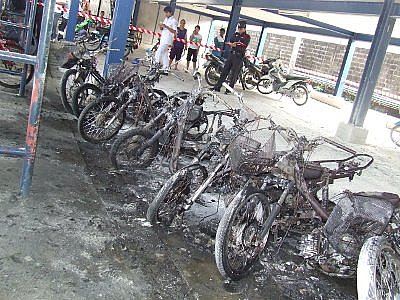 PHUKET: Police are investigating what caused the blaze that engulfed seven motorbikes at the Boat Lagoon yesterday afternoon.

Somruedee Polmat, a 21-year-old gardener, spotted the bikes ablaze at about 3pm.

She yelled for the nearby security guard to summon an on-site fire truck and the fire was extinguished within minutes.

Seven bikes in the front row of the motorbike parking area were seriously damaged. Others sustained minor damage.

Saowalak Aead-on, who works at Phuket Master Team at the marina, said she was lucky. “My bike was parked in the second row. I was lucky that we could move it in time, but it still was burned a little.”

Phuket City Police Capt Chaliew Tuyhu is leading the investigation into the cause of the blaze. He told the Gazette he had to question more witnesses before he could determine what had started the fire.