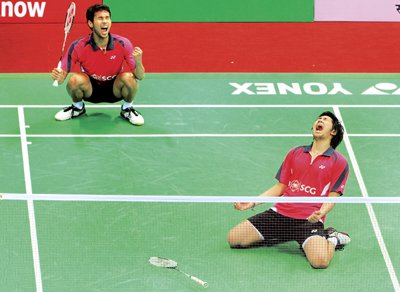 PHUKET: Since the arrival of the Olympic Torch in the United Kingdom during May, anticipation for the games has continued to grow.

The torch is being carried across the UK by around 8,000 people ranging from athletes such as Sir Steve Redgrave, local people and celebrities.

The torch will finish its 70 day relay by lighting the flame that will herald the start of the games on July 27.

This is the third time London has hosted the Olympics. Once just before the First World War in 1908, and again after the end of WWII in 1948.

London expects to see 205 nations take part in over 300 events, and Thailand will of course be one.

Thailand made its Olympic debut in Helsinki in 1952, though did not win its first medal until the 1976 Montreal Games when boxer Payao Poontarat claimed bronze.

Dhawee Umpornmaha continued the boxing theme with the silver at the 1984 Los Angeles Games. Somluck Kamsing won Thailand’s first ever gold medal at the 1996 Atlanta Games, also in boxing.

The Kingdom is sending 37 athletes to London to compete in 19 different events, including a young Phuket athlete, Maneepong Jongjit.

Jongjit partners with Bodin Isara in the men’s badminton doubles and were victorious in April this year at the Indian Open, defeating the Korean pair to qualify.

Another youngster hoping for glory in badminton is teenager Ratchanok Inthanon, three time defending youth champion, and is confident she has what it takes to claim Thailand’s first ever medal in badminton.

The Amateur Weightlifting Association recently caused a shock by announcing they would not be taking current Olympic champion Prapawadee Jaroenrattanatarakoon, who won the women’s 58kg gold in Beijing.

The athletes have also been given an extra incentive by the government and sponsors to help them strive for medals. Each competitor winning a gold will receive 10 million baht, silver 5mn and 3mn for bronze.

Toyota races back to Phuket