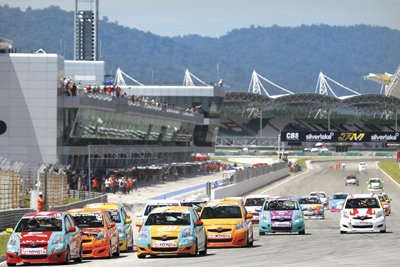 PHUKET: The Toyota Motor Sport Series is set to return to Phuket with organizers hoping to repeat the resounding success of last year’s edition.

This year’s program was announced last week at a press conference held at the Royal Phuket City Hotel.

Among the racers will be four university students from different parts of Thailand who were selected by the Toyota Racing School Team after passing a number of rigorous tests, devised by some of Thailand’s Championship winning drivers, in both driving theory and practice.

In addition to racing, spectators will be treated to an array of performances and activities at the event, which also coincides with and thus celebrates Toyota Thailand’s 50th anniversary.

Among these include the Champion Performance Show, which will give Toyota’s best driving instructors the chance to show off their skills.

Students from Phuket will take part in a cheering team contest with more than 70,000 baht in prizes up for grabs. Thai superstar Bank (of the band Clash) will play a free concert in Sapan Hin on Sunday at 6pm to bring the event to a close.

Qualifiers are on Saturday with the finals to be held on Sunday.