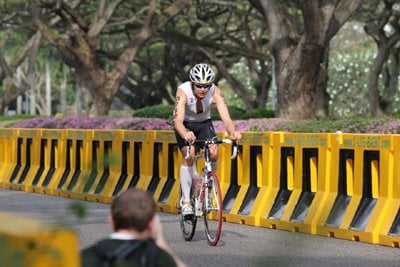 PHUKET: They say tragedy brings people together in a meaningful way. This is the case with triathlete Richard Holland and his supportive friends. In the early hours of the morning on Thursday October 11, 2012, Rich (as he’s known to his friends) set out cycling in Dubai to train for the upcoming Laguna Phuket Ironman 70.3. What was supposed to be a regular training ride, turned out to be anything but that!

Despite taking numerous safety precautions, Rich was hit from behind by a car, sustaining multiple life-threatening injuries. These included: broken ribs, punctured lungs, a fractured sternum, fractured right fibula, and severe injuries to his brain. His brain injuries are substantial, the worst of which is a contusion on his brain stem. This tragic accident has left Rich in a persistent coma and thus he cannot compete in the race as planned.

This race has special significance for Rich. Having competed in the Laguna Phuket Triathlon in 2010, Rich had set his sights on the Ironman 70.3 Race and was in impeccable shape and fighting fit when his accident occurred.

To show their support and spread the appeal for Rich and cycle safety, several of his friends and fellow athletes from Dubai (and around the globe) will be competing in the Ironman event in his honor. They, and anyone else who would like to show their support, will be donning Back On Your Bike wrist bands. The ‘Back On Your Bike’ campaign has been established for Rich to raise money for his medical recovery.

A World-Championship level triathlete, passionate fisherman, avid outdoorsman, loving brother and loyal friend are just some of the words that come to mind when asked to describe Rich. Rich proudly represented South Africa in the 2007 World Duathlon Championships.

He has competed regularly in triathlons and duathlons around the world, from Thailand to Canada and from Singapore to Johannesburg. He is a passionate individual who exudes energy into all that he does.

Rich and his friends planned to celebrate his 30th birthday whilst in Thailand (Rich turns 30 on November 30). Rest assured that his friends and fellow triathletes will celebrate in his honor.

For more information on Back on Your Bike, and how you can participate or donate, visit: www.backonyourbike.com.

Racing For Rich: Team Mate Profiles
Andrew MacRae, Edward Hawkins and Brett Smyth, are just some of the Dubai-based athletes that will be racing for Rich on December 2.

Edward Hawkins
Ed is a UK athlete currently based in Dubai where he works as a teacher. His spare time is taken up competing in triathlons where he has notched up the following impressive results:
Represented Great Britain as a long distance triathlete
Ironman 70.3 World Championship Qualifier
Ironman Hawaii World Championship Qualifier, 2011
Great Britain Top 5 (Age Group), Roth, 2012

Brett Smyth
Relatively new to the world of triathlon, Brett was encouraged by Richard to compete in his first Ironman 70.3 event in Singapore this year (placing 31st in his age category). Brett will be racing in Phuket on behalf of Richard to show his support for the Back On your Bike Campaign. He is also acting as the official spokesperson for the Dubai athletes on tour in Phuket.

Distributed on behalf of Back On Your Bike by: Pippa Holland and Brett Smyth.

Phuket Poll: Bringing illegal taxis in from the cold