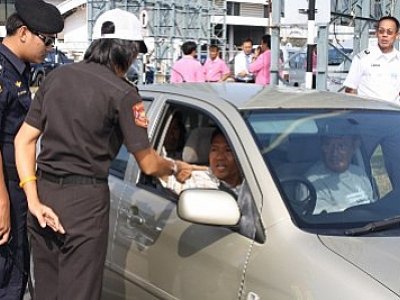 PHUKET: The Phuket authorities over the past year have taken a combination of measures to bring illegal taxis on the island under regulation.

The latest move brought 50 airport taxis into the fold from a “co-operative” that was openly and illegally serving passengers at the airport.

However, that move followed a mini-blitz in which 194 drivers were fined for being illegal or not carrying the now-mandatory stickers on the sides of their vehicles that publicly identify the driver in English – and that was just on the first day of the “crackdown”.

The push to regulate Phuket’s taxi industry has been a long time coming, and follows increasingly frequent and increasingly severe attacks on tourists and other taxi drivers.

In light of the current “combination of measures” being used by the authorities, the Phuket Gazette‘s latest online poll asks readers, “Should Phuket authorities be lenient in allowing illegal taxi drivers to become legal?”

To view the results of our previous poll, asking “Should Phuket host mega-event beach parties such as the Paris Hilton mega New Year Party at Surin Beach?”, click here.

To expand upon your views on this issue, leave a comment in the readers’ forum below, or in the island’s largest online community at the Phuket Forum. The Phuket Gazette welcomes any input that meets our House Rules.