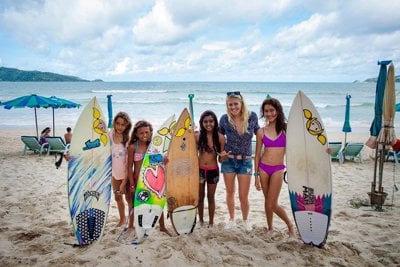 PHUKET: Women’s division competitors were the first to be sent out yesterday morning under sunny tropical skies and two foot waves, to kick off day one of the 6-star ASC/ISC sanctioned Quiksilver Open Phuket at Patong Beach.

Local Thai surfer and current ASC rankings leader Annissa Flynn had no trouble winning her heat and looks in fine form to make it into the finals on Saturday, which will secure her the 2012 Asian Surfing Championship Women’s title if she wins, to be awarded on Saturday night.

Also advancing into the semifinals, with impressive performances today, were Taiwan’s Jesse Hong and Indonesia’s Gamala Hanafia. Hanafia took the highest combined heat score honors with a total of 9.75, while Hong scored a close second with 9.25.

Stephanie Gilmore will be giving a surf clinic Saturday afternoon as well as appearing to help open the new Quiksilver Women’s store in the Jungceylon Shopping Center on Friday evening. She may even catch a few waves of her own in between. While watching the first heats of the Women’s Division, she commented, “Wow, I’m really surprised that there are this many girls competing here. I thought there would maybe be 5 or 6, so to see this many is amazing.”

Then it was on to the longboard division action, where after a trial heat and heat one the contest was suspended as a storm front moved through. Heavy winds and rain delayed the action for a couple of hours, but resumed with larger and more powerful surf to finish off the remaining three scheduled heats.

Arip “Mencos” Hidayat from West Java, the 2011 ASC Longboard champ and current ratings leader, put on an impressive performance in the challenging conditions of heat one to advance to the semifinals.

In the last heat today, #2 ranked Luke Landrigan drew applause from the crowd with two nose rides and some big turns in stormy waves to win his heat.

“It was a lot better out there than in looked from the beach,” said Landrigan. “With the increase in size from the storm there was more power to work with, so I’m glad we took that break. I’m really looking forward to getting through the semifinals to see if I can best Mencos. He’s got a really good bag of tricks and he’s the reigning champion, so I’ll need some luck for sure,” he added.

Two rounds of the Men’s Open Division also took place today, as well as the first round of the Master’s Division, with the competition kicking off at 7:30am.

The swell is predicted to increase substantially overnight, and even with the onshore winds it will make for great conditions to get the early rounds of the Men’s Open underway.

In his speech, the Mayor of Patong Beach thanked Quiksilver as well as all the sponsors for selecting his town to host this extraordinary surfing event for the second year in a row, and then Quiksilver SEA CEO Paul Hutson presented him a check for 50,000 Baht (almost $1,700 USD) on behalf of the Quiksilver Foundation.

During the next few days of competition there will be exciting skate and BMX demonstrations by DC teams from America and Australia and mini ramps have been set up beachside for all to watch.

So tell everybody you know to come on down to Patong Beach in Phuket for the next 3 days of amazing action both in and out of the water. And yes, the rumor that a super talented progressive free surfer from Western Australia will be flying in to show off at the event is true…Ry Craike is here.