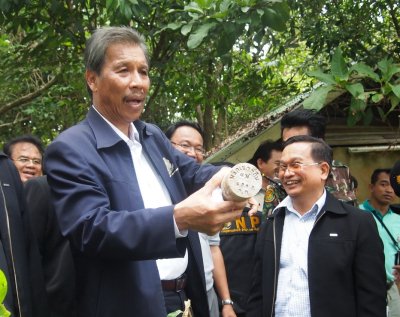 PHUKET: The Director-General of the Department of National Parks, Wildlife and Conservation, Damrong Phidet, has warned that come September 25 he will order 400 officers to start a full-scale investigation into land encroachment along the boundaries of Phuket’s Sirinath Marine National Park.

In Phuket yesterday, Mr Damrong flamed some officials for their slow progress in the investigation of 12 resorts accused of encroaching on national park land on Phuket’s west coast.

His reprisal came during a meeting at Sirinath Marine National Park headquarters after a review of the investigation being conducted by teams drafted in from Royal Forest Department (RFD) offices nationwide revealed their rate of progress.

At the meeting, some investigation teams reported “great success”, with five landowners having police complaints filed against them for encroaching on national park land.

Other investigation teams, however, reported having encountered difficulties. The main stumbling block was reportedly the interpretation of aerial photographs of the land under investigation in order to determine where the boundaries lie.

After that date, Mr Damrong said he will deploy 400 inspectors to examine the land ownership documents pertaining to all plots along the national park border.

Sirinath National Park covers a total land area of 13,750 rai, and Mr Damrong said that 3,500 rai of park land is already under investigation.

“The [400] inspectors will have 30 days in which to carefully examine the land documents [for plots along the park boundary] and legal action against the landowners will follow [if they are suspected of encroaching on park land].”

After the meeting, Mr Damrong led his team to inspect the incomplete Phuket Peninsular Spa & Resort, one of the resorts under investigation.

Near the resort, not far from a run-down abandoned luxury hotel building, Mr Damrong showed reporters a pile of unused regulation boundary markers.

Mr Damrong said that his officers had begun a preliminary investigation and now suspect that land officials may have been preparing to issue illegal land ownership documents to three or possibly four investors for the plot.

In addition to the meeting and the site inspection, Mr Damrong personally received a complaint from two residents from Baan Sakoo.

Chaweng Udomluk and Somrudee Sirirat told Mr Damrong that they would like the investigation teams to inspect resorts and bars opposite the now-derelict Crown Nai Yang Suite Hotel.

“Those resorts and bars are under construction. They have closed the area off and prevented us from getting to the beach. It is a problem for us because we used to sell food and things around the area, and now we cannot,” said Ms Somrudee.

“We need help from Mr Damrong and his teams to clarify if the resorts and bars have encroached on Sirinath National Park land,” she said.

After receiving the complaint, Mr Damrong led his teams to inspect the area. He later directed the new chief of Sirinath National Park, Cheewapap Cheewatham, to send an investigation team to examine the land ownership documents of the resort and bar owners.

Should they reveal the documentation be illegal, the owners of the bars and resorts will be prosecuted.