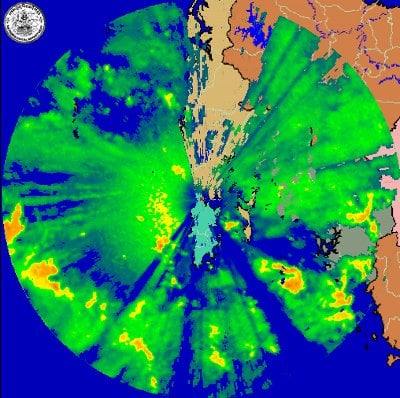 PHUKET: The Thai Meteorological Department (TMD) has issued its sixth official warning in 36 hours for flash flooding, forest run-off and landslides in Phang Nga, Krabi and Trang – but has yet to issue a warning for Phuket.

Likewise, the Phuket Department of Disaster Prevention and Mitigation (DDPM) confirmed to the Phuket Gazette this afternoon that no flash flood or landslide warnings had been issued for the island.

However, a meteorologist at the Southern Meteorological Center, warned, “Although Phuket was not included in the initial report, I would advise people on the island to prepare for the affects of heavy rain, such as landslides and flooding.”

The latest advisory, issued by the Southern Meteorological Center at Phuket Airport at 4:30pm today, repeated the TMD’s warning of abundant heavy to very heavy rain across Thailand.

Severe weather conditions are expected to continue until September 17.

All vessels were warned to proceed with caution as wind-driven waves of up to two meters high continue to cause rough conditions in the Andaman Sea and the upper Gulf of Thailand.