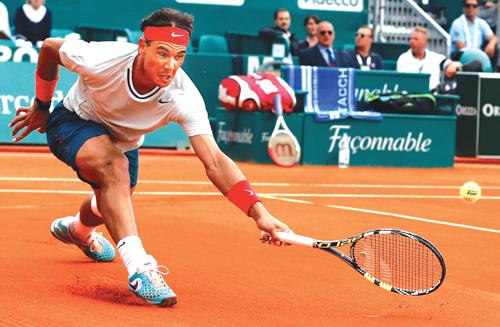 PHUKET: The arrival of the clay court season always throws up some surprises. Many players have taken an extended break from the game, others are adjusting to the vagaries of the slower surface.

No such problems for a renascent Rafael Nadal who defeated an in-form Juan del Potro in the Paribas Open final at Indian Wells. Apparently it did not matter which kind of ball he was hitting. He even broke par on millionaire owner Larry Ellison’s private golf course. Remarkable for a man who had spent nearly eight months out with a career-threatening knee injury.

Unsurprisingly, he came to the Monte Carlo Masters as the bookmakers’ favorite. Having won the title on eight occasions and, in the process, won 47 successive matches, Rafa had always proved invincible on the red clay of the Principality. It was his kingdom.

But Monte Carlo’s show court, framed by an azure Mediterranean, and adorned by the glitterati of fashion and film, has a habit of throwing up surprises. Andy Murray, fresh from a victory over David Ferrer at Miami, and newly elevated to the position of number two player in the world, abjectly surrendered to Stanislas Wawrinka (1-6 2-6) after a performance littered with mistakes – 28 in all. As he ruefully admitted:

“I started making some errors and … hitting the ball shorter. There are things I need to work on [on] this surface … that I need to get better at.”

He has two weeks to address his problems – including an erratic serve – before the next joust in Madrid.

Novak Djokovic, the world number one, fared much better: his only taxing encounter on his way to the Monaco final a three set affair with Russian Mikhail Youzhny. Like Murray, he confessed to teething troubles with the new surface, saying “My clay movements are still not at the maximum. But I’m slowly getting into it.” But then Novak is a master of understatement.

Rafa’s progress to the final was majestic. Only Jo-Wilfred Tsonga came close to taking a set off a man whose ground strokes, especially his clubbing, top-spin forehand, were back to their remorseless best.

Thus, the dramatic stage was set for yet another encounter between the two preeminent players of the younger generation. Nadal’s record on clay, his new lease of life, above all his historic Monte Carlo domination, suggested he would win.

But the tournament had one more surprise in store. Djokovic started the final like a man on a mission, striking the ball flat and early and with such authority that even the arch retriever Nadal could only watch as the winners sped past him. The first five games went to Djokovic before the persevering Nadal managed to claw back two games. Too little, too late.

The second set was much closer as Djokovic’s erstwhile flawless backhand coughed up a few unforced errors, but the tie break was won conclusively (7-1) by the Serb. Game, set and match (6-2, 7-6). Novak had broken Nadal’s cherished record at his favorite tournament.

Provided he stays fit and focused, Djokovic will take some beating this year.