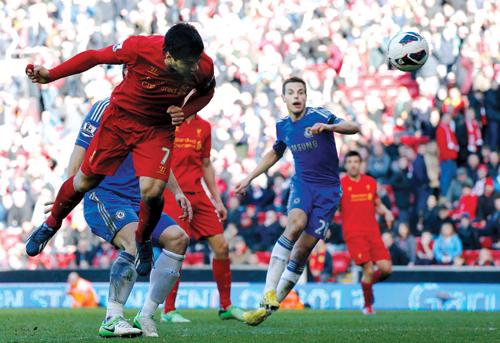 PHUKET: Manchester United claimed their 20th top-flight league title last weekend with their 3-0 win over Aston Villa at Old Trafford. A first half Robin Van Persie hat trick sealed the win for United and ensured that the Premier League title went back to Old Trafford with four games of the season left.

Van Persie opened the scoring in the second minute to ease the nerves and increase the level of expectation at Old Trafford. The Dutch striker then added two more goals before halftime, including running on to meet a searching 30-yard pass from Wayne Rooney that he volleyed from the edge of the box on his left foot past a helpless Guzan in the Villa goal.

Manchester United have won the Premier League 13 times and Ryan Giggs has featured in all of those campaigns. Ominously, Alex Ferguson claims that Giggs may have a few more years left at the top level.

Claiming this season’s Premier League title makes up for the heartache Ferguson and his team suffered on the last day of last season, when Sergio Aguero latched on to a pass from Mario Balotelli – the only assist of Balotelli’s eventful City career – to score the winner against QPR, with the last kick of the game to win the Premier League.

Ferguson made sure this season’s title race did not go down to the wire when he purchased Van Persie for 24 million pounds sterling from Arsenal last summer. The Dutch striker’s goals have been key to their success. His 24 league goals this season are more than strikers Wayne Rooney (12), Javier Hernandez (8) and Danny Welbeck (1) combined.

Luis Suarez was the center of attention again in Liverpool’s game against Chelsea. The Uruguayan striker conceded a penalty that Eden Hazard converted to put Chelsea 2-1 in front, Suarez then scored a 97th-minute headed equalizer to claim a draw for Liverpool. In between these incidents, Suarez was involved in a tussle with Branislav Ivanovic in the Chelsea box that resulted in Suarez biting Ivanovic’s arm. The referee missed the incident but the FA have charged Suarez with violent conduct which he has accepted, but he doesn’t feel that he should get a ban longer than three games as the match officials missed the incident.

Arsenal’s push for third place continued with a 1-0 win at Fulham. Defender Per Mertesacker was the unlikely scorer in an unconvincing win that finished with both teams down to 10 men. Steve Sidwell was sent off for Fulham in the first half for a dangerous tackle and Giroud was dismissed in the last minute of the game.

Stoke’s 2-0 away win at QPR helped move them away from the bottom three and all but doomed QPR to relegation. Peter Crouch, who Harry Redknapp has signed for two of his previous clubs, put Stoke in the lead just before halftime and a Jon Walter’s penalty in the 77th minute sealed the victory.