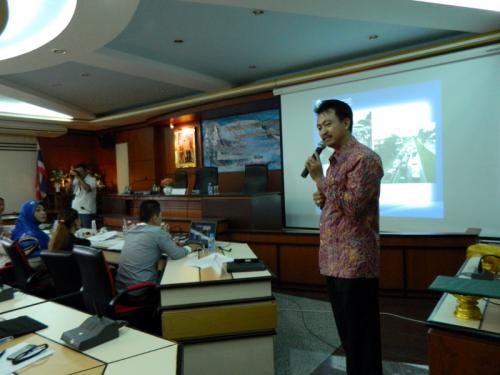 PHUKET: The Phuket Marine office, in an attempt to keep the airport-to-Patong sea taxi project afloat (story here), declared that the project would not affect the livelihoods of current taxi and tuk-tuk drivers.

“We do not want to steal customers from tuk-tuk and taxi drivers. We want to attract more tourists to the island by offering them a reasonably priced way to avoid Phuket traffic and the negative impressions it leaves them with,” Phuket Marine Office chief Phuriphat Teerakulpisut said at a meeting on April 26.

Mr Phuriphat went on to explain that though the project would re-direct the flow of some potential taxi and tuk-tuk customers, overall it would improve the situation for taxi and tuk-tuk drivers by lessening the traffic problems and allowing them to make more trips a day.

However, Mai Khao Tambon Administration Organization (OrBorTor) President Sarawut Srikookam believes that if the project gains enough support and is approved, it will affect taxi drivers in Mai Khao.

“Nonetheless, Phuket is a tourism destination. Tourist should have choices on how to travel around the island. When looking at the big picture, the project will provide more advantages than disadvantages. The tuk-tuk and taxi drivers should be aware that this project would have long term benefits for the public as a whole,” Mr Sarawut said.

With an 80 per cent approval rating from Mai Khao residents for the project, Mr Sarawut gave his full support.

“We believe the project will decrease traffic problems and ease the pressure on our currently crowded roads,” said Mr Sarawut.

Patong Deputy Mayor Chairat Sukban also showed his support for the project at the meeting, saying, “It is now 2013, our city is getting bigger and bigger – it’s not what it was 20 years ago. We have to adjust our way of thinking and have to be open to new ideas that will improve our province.”

The project, which will cost an estimated 181 million baht, still has several hurdles to leap before the plan is even presented to the Marine Department in Bangkok.

Mr Phuriphat confirmed that he still needed to check with the Phuket branch of the national air traffic control authority Aerothai (Aeronautical Radio of Thailand) about whether or not building a pier will affect the safety of planes landing and taking off. Then on April 29 he will discuss the situation with relevant departments before eventually holding a public hearing at Patong Municipality.

Only after the project gains the approval of locals officials and residents will the budget be submitted to the Marine Department in Bangkok, Mr Phuriphat said.