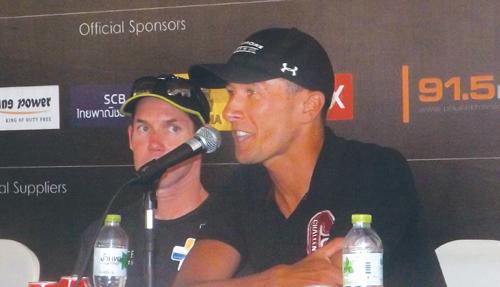 PHUKET: Challenge Family recently announced a partnership with Asia’s longest running triathlon, Laguna Phuket Triathlon (LPT), and in so doing, revealed its commitment to developing a series of half and full distance events throughout the region.

LPT has been attracting the sport’s legends to the stunning tropical island for two decades. In 2013 it will celebrate its 20th anniversary with the launch of the Challenge Laguna Phuket Tri-Fest.

“We feel it’s fitting that our popular and iconic race should be the debut Asian Challenge event, and we’re confident in the potential of our Challenge partnership to further expand its global popularity among professional athletes and age groupers alike,” she said.

With over 20 years of experience delivering triathlons in Asia, Murphy Reinschreiber is tasked with overseeing the development of Challenge Family races across the region.

“I’ve been fortunate enough to be involved with Laguna Phuket for every step of its triathlon journey, including its move to Challenge,” he said.

“The values that have endeared the Laguna Phuket races and Challenge Roth to their participants over the years will be apparent at all Challenge races in Asia. The lesson I’ve learned working in Asia is that triathletes expect high quality event experiences that extend beyond the start and finish lines. Challenge races will meet these expectations – our DNA from Roth and Phuket assures it.”

The Challenge Family global series of long distance triathlons currently features 13 races throughout Europe, North America, Asia and Australasia. Challenge Family races are known for their excellent athlete race experience and commitment to the communities in which they take place.