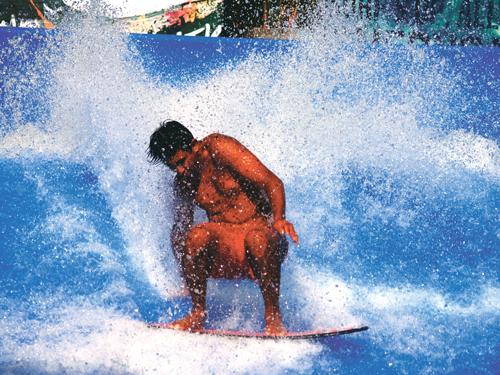 That’s right. Never again do surfers have to stow their boards for the high season, now you can have it all.

Surf House Phuket is the brain child of Kata native Khun Wallop and Finnish expat Jannen, owner of Raya Divers. The new venue is operated in partnership with Quiksilver, Roxy and Chang.

Khun Wallop grew up surfing in Kata and says this new concept will incorporate man-made surf with traditional retail and F&B.

Inside the Surf House is the new Quiksilver and Roxy retail outlet store, a DJ booth and an upstairs VIP lounge, plus a restaurant and bar. Surf House employs 40 staff members and bills itself as an all-in-one social experience.

“We term ourselves as ‘a playground’,” says General Manager Joe Ang. “We built this place for everyone. This includes all demographics from children to adults, local Thais, foreign residents and tourists. If you want to surf there is a surf machine, if you want to shop there’s a retail shop, if you want to dine then we have a restaurant that serves both Western and Asian cuisine.”

Located across from Kata Beach, which has some of the island’s most consistent waves, the venue can host up to 200 people and is surrounded by more surf shops than any other place on Phuket.

The major downside to surfing in Phuket is that waves are seasonal, a product of monsoon winds that drive large swells on-shore.

It could be said that waves are possible to surf roughly five out of every twelve months here. Then, the season changes, winds die down, water clarity increases, and the Andaman Sea becomes like glass – encouraging millions of people to flock to Phuket.

Surf House officially makes it possible to surf year-round – albeit for a fee.

The centerpiece of Surf House Phuket is its unique ‘Double FlowRider’ surf machine, which pumps water over a vinyl surface at a speed of 30 kilometers per hour. Riders are encouraged to be creative and can choose between stand up riding on a flowboard, kneeling or lying down on a bodyboard.

The sensation of flowriding is indeed much like that of surfing a wave, but the mechanics are not exactly the same. The weight distribution is a little more on your back foot than in surfing making it feel more like skateboarding.

Picture riding a wave in the ocean. Generally, once you stand up on a wave, the rule is to pick a direction (left or right) and turn quickly to avoid being swallowed up in the curl. With flowriding, there is no need to make this initial turn and the result looks something like snowboarding on water.

In fact, many of the tricks performed by pro riders at the opening demonstration were transplants from other board-sports, including kick-flips/turns, ollies, noserides, grabs and grinds.

Most people will be able ride a flowboard with a little practice – but the first time is usually pretty hilarious to watch. The juxtaposition of gargantuan strong men falling head over heels next to petite teenage girls having no difficulty whatsoever was worth attending the opening in and of itself.

Flowboarding is fast gaining popularity in the Asia-Pacific region, says GM Joe Ang, who is from Singapore where the sport has recently taken off. Joe believes that Surf House Phuket is poised to expand that market here.

Owner Khun Wallop notes that for the past two years competitions and championships have been held annually. He adds that Surf House Phuket intends to host top level competitions in the coming years.

“Outreach to local children is also very important to us as it shows children a positive way to live their lives,” says Khun Wallop. “I see many kids with potential in the surfing community here and I hope Surf House Phuket can be a positive breeding ground, not just for the next generation of surfers, but also for role models, who younger kids can look up to.”

Surf House Phuket is located across from Kata Beach.

Turn into the main entrance to the beach, next to the Kata Beach Resort, and bear right after you reach the parking lot. Open daily from 10am to 10pm.

Chinese New Year: the year of the snake nears