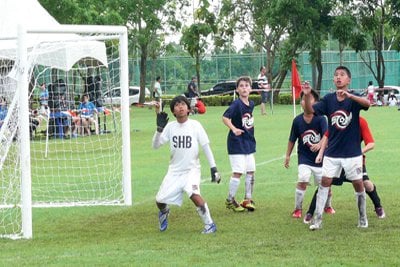 PHUKET: Goalkeepers are a breed unto themselves. Both hero and villain, as with any position on the playing field. But one characteristic of a goalkeeper that can never be doubted is that of bravery. The last line of defense, the last hope when all seems lost, that is a goalkeeper.

It may sound daunting, but the thrill of making a save to keep your team in the game is a feeling like no other. Of great goals there are many, but great saves are few and far between. So if being a goalkeeper is a dream of any youngster here on Phuket, then Brazilian Soccer Schools at Thanyapura Sports and Leisure Club is where those dreams can be realized.

On February 21 and 24, from 4-7pm, BSS will provide an opportunity for aspiring goalkeepers to be coached on the key aspects of goalkeeping and help develop techniques in this important position.

Leading the course is BSS Phuket Head Coach, Martin Hill, who is a vastly experienced goalkeeper with hundreds of games played in goal throughout his career. Martin will encourage the players at the camp to become comfortable and confident between the posts using specialized coaching games.

There are four different size of goals ranging from the smaller U8 Goals up to full-sized professional goals. This ensures that players from 6-16 years of age can participate in the sessions with all the correct equipment. Based on TSLC’s full-sized synthetic pitch, the players will have plenty of space to practice and enjoy their new skills.

In the U14 division, Germany Green took on France after their first defeat of the season last week. In an exciting display of football, both teams attacked relentlessly which created plenty of goals and action. In the final five minutes, France ahead by one goal, scored two unanswered goals to win the game 9-6 which also jumps them to first place in the league.

The U11 match saw Germany Green keep pressure on the leaders, Brazil, by claiming a hard fought 3-1 victory over a dogged France team. The second group of matches saw Brazil against Thailand, again in both age groups.

The U14 game was another tight affair. Thailand capitalized on more opportunities than Brazil and ran out 5-3 winners. The U11 Brazil team continued on their determined march towards the 2012 title by claiming their fifth win out of five games in a 4-1 defeat of a developing Thailand team.

The final matches saw Argentina take on Germany White. Argentina’s U14 side grabbed top spot in the league for the first time this season with a victory after a game that showcased their goalscoring capabilities.

Germany White recovered well, but eventually succumbed to a 8-4 defeat. The U11 draw saw two teams hoping to reboot their season after losses in the previous week. In an extremely competitive match Germany White’s superb defense held against a creative Argentina attack for a 2-1 victory, a result that has lifted them into third spot on the table.