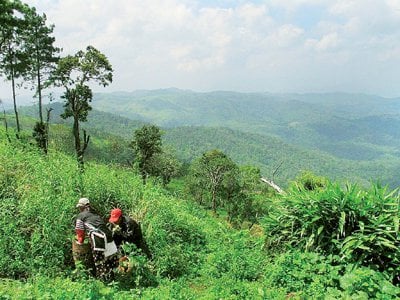 PHUKET: Thailand is a large and varied country, especially in terms of its length from north to south (1600 kilometers), and its coastline of 2,600 kilometers. Because of the resulting range of micro-climates, it is able to produce an unending range of flowers, trees and fruit.

Put another way, Thailand’s biodiversity is immense, the country is still the trustee of an extraordinarily rich natural landscape. On a small island such as Phuket, there is both coastal wetlands and tropical forest. And while the wetlands, often the site of mangrove swamps, are being eroded, and the forest, which is a mixture here of rainforest and deciduous woodland, has been degraded by plantations and logging, these habitats still exist.

In the north, there are highlands clad in elevated woodlands, where trees such as teak and rosewood, pine and oak can flourish. Again, most have fallen victim to the commercially wielded chainsaw, but the Kingdom is still home to more than 10,000 species of plants, including over 100 types of wild orchid. Riches indeed.

While much of this floral cornucopia is nation-wide, some plants are limited in their distribution and are associated with different regions of the country. For example, the northern highland provinces can grow cold-climate shrubs such as oolong tea, and other fruits such as plums and strawberries. Doi Chang has been known for its Arabica coffee for decades, in fact, ever since the Doi Wawee Highland Research Center was established on nearly 3,000 rai of land in 1985. I wonder how many people are aware that Thailand is a producer of both major beverages of the world tea and coffee.

Sometimes, I wish that there was more experimentation with plant varieties in the south.

Alright, there is one near insurmountable issue with any plants that need a cold season, or at least a cool period, something that the montane regions of the north are able to provide. I, myself, admit to failing with brugmansias and bird of paradise flowers, both of which thrive in the higher and cooler regions of the north. But there seems to be a reluctance to experiment with plants.

In the case of fruit trees, a prime reason for this is the high cost of arable land. It is, sadly, far more profitable to erect an apartment block than grow orchards of langsart.

However, some species could be commercially viable. Take the avocado. It grows extremely well in Phuket. I have two in my garden and I know of one expat here who loves the fruit so much he has more than 30 in his patch. Another friend has one mature tree that crops regularly twice a year. Yet visit the average supermarket and you will pay the earth for imported huss avocadoes.

In the case of many fruit, they tend to be cultivated in specific areas. For example, the langsart (lansium) is grown extensively in Uttaradit province Or, they are simply too big for the average garden. Mangoes, sataws, mangosteens, jack fruit or tamarinds are all liable to get out of hand.

But guavas, pomeloes, rose apples, rambutans and Thai lemons (what we call limes), not to mention papaya and bananas, can all be grown in your garden.

It can be done and to the consequent benefit not only of people, but of birds, bees and butterflies too.