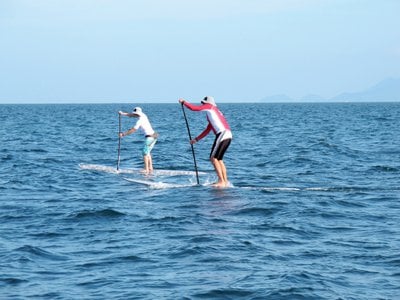 In a time of 4 hours and 32 minutes on February 3, the “Stand Up Paddle” (SUP) team successfully laid their boards to rest on Phi Phi Don.

Compere said the success of the event would mean that the Lanta-Phi Phi challenge would become an annual event, saying it was a hugely enjoyable day’s paddling.

And the course length of 32-kms could also be a contender for a long-distance race on the SUP professional tour.

“The distance of the course is great, and Thailand is a perfect destination for people to travel to as a warm water event,” Augaitis said.

While team member Druve, who had only paddleboarded once before, said he “couldn’t believe” he made it, Bilter said the last four kilometers were very tough.

“It was a great day and will form a lasting memory for me,” Bilter said.

The event was organized by Lanta Paddlesports with help from Starboard and Amara Watersports.

The next Lanta-Phi Phi challenge is planned for March 2013.

Paddleboarding has its roots in Hawaii, and although only six years young, is the world’s fastest growing sport. Easy to learn and providing a full-body workout are reasons why the sport is experiencing a surge of interest. It is also evolving from traditionally a coastal-water-based sport to include lakes and rivers around the world.